Yochai Greenfield on “It Gets Bitter” 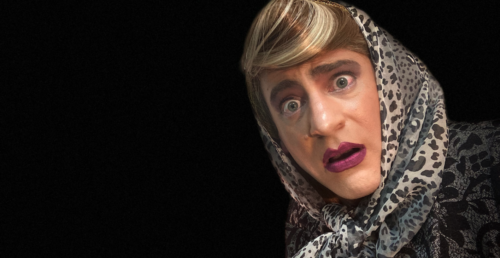 Yochai Greenfeld as Abbi Gezunt in “It Gets Bitter”

On June 16, LABA artist Yochai Greenfeld (New York-2018) will be presenting a full-version of his LABA project “It Gets Bitter” at the Gordon Art Center in Baltimore as part of the Queer Jewish Arts Festival.

“It Gets Bitter is a one act dramedy featuring Abbi and Si Gezunt, a mother-son Kosher-Entertainment Duo. After Si comes out to his mom as gay, she outsources mental counseling from a questionable therapist, who threatens to ruin Si’s life and his relationship with his mother. The mother and son face off in front of the whole community and search for new ways of accepting each other and having their community accept them. Directed by Eric Parness, the play features video art, drag performances, live singing and some serious drama, and tackles acceptance within the family and community.”

Yochai spoke to us about the piece, and how the LABA process helped it become a reality.

Tell us about you, in seven words.

My LABA project was a show was about Abbi Gezunt, a drag queen, who sits a fake shivah for her son after he comes out as gay. In late 2021, I was offered to turn this piece into a full length play, and decided to add a first half to the story, where before “killing off” her son, Abbi sends him to conversion therapy. It was a bold choice, I guess, because who wants to come and see a show about such a sad and heavy subject? But that’s why this is also a Drag show, so you know it’s somehow going to also be funny, fierce and glamorous.

How did the year of studying LIFE & DEATH inspire this piece?

During the year, we studied various texts regarding mourning and loss, and there was a certain concept that astonished me — apparently you can sit a shivah on someone who’s not necessarily dead! This was a hack that the Jewish sages invented years and years ago, when men went off to war and never came back, though there wasn’t necessarily any proof that they were actually dead. Their wives would remain bound to the marriage, and would never remarry again, sometimes unable to have families for the rest of their lives. So the hack for that was called “Distant Rumor” (Shemuah ReHoka – שמועה רחוקה). If there was a good chance that the husband died at war, the Sages would declare him “allegedly” dead, and treat his wife as a widow, which would then enable her to remarry or at least get an adequate social status. However, some communities started abusing these hacks as a means of disownment, for example if one of their children married out of Judaism. (Like in “Fiddler on the Roof” when Tevyeh tells his wife, Golda, “Chava is dead to us”, after their daughter decides to marry her beloved gentile boyfriend). Another example of abusing this hack is when a child comes out of the closet, which is something that still happens today in some ultra-Orthodox communities. Some might say that regardless of these harsh acts of disownment, the very act of coming out can entail mourning the loss of one’s old sense of self, especially if there was a prolonged closet period.

Which texts spoke to you?

I especially enjoyed the Talmud texts that discussed the different opinions about whether or not there’s an afterlife and what that might look like.

For example, the story about Rabbi Joshua ben Levi and the Angel of Death. From K’tubot Tracatate in the Babylonian Talmud (page 77b):

How else did being a LABA artist help you make this piece a reality?

LABA has a special grant program for alumni fellows called “Second Stage” where you get a production stipend and ample resources including the most significant one: a stage. I feel so lucky to have been offered this opportunity to write a full length play that is being produced in a New York Theater (at the 14th St. Y, where LABA New York lives), and is being sent to a Festival in Baltimore. A cool thing about being a part of LABA is that all Jewish artists are connected…!

After this run at The Gordon Center, what do you plan on doing next with this piece?

I’m hoping to partner with LGBTQ+ Jewish and non-Jewish organizations, and offer them to endorse my play and make it the centerpiece of one of their gala events. This way, I hope to attract people to see the play who might be future investors and collaborators in taking this show to its next step, which I hope can be a national tour and maybe an Off-Broadway run. No dream is too big, this is still New York.

Yochai Greenfeld (He/Him) is an actor, dancer and writer, born and raised in Israel, and has been performing and creating in the States since 2017. His recent credits include the Broadway tour of “Fiddler on the Roof”, “A Charlie Brown Christmas Story”, and Broadway Backwards 2019. Abbi Gezunt was conceived as part of the LABA fellowship for Jewish Culture, and has since launched a youtube channel featuring Queer Jewish Educational videos. This is her first full length play.