Reflecting on a hummus workshop as a metaphor of life: LABA alum Amy Handelsman shares her experiences of the day.

One of my strongest childhood memories is the day we made peanut butter in Miss Greenfield’s second-grade class. It was with great anticipation that we began on a crisp autumnal day—a whole Friday morning devoted to “cooking.”  Counting off one, two, three, four, we were divided into groups and assembled at our designated stations. The “ones” shelled the peanuts; the “twos” poured them into the peanut grinder and turned; the “threes” added the oil; the “four” spread the peanut butter on slices of Wonder Bread . 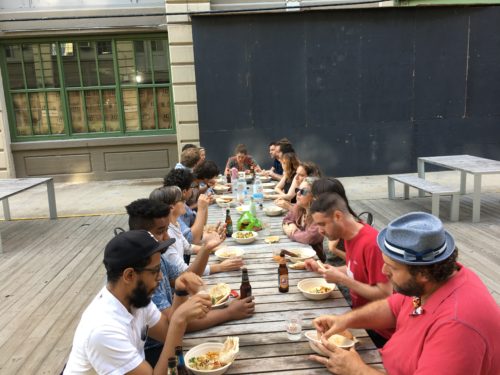 A lot has changed since then. For one thing, all nut-based foods are now strictly prohibited in classrooms and whole grains have replaced Wonder Bread. But the satisfaction and joy of creating a simple meal as a group is still in fashion, as evidenced by our experience making hummus as the finale to the September retreat welcoming the 2018-2019 Fellows of LABA:  A Laboratory for Jewish Culture.

The day began with a welcome by our Artistic Director, Ronit Muszkatblit, followed by a study session led by Resident Scholar Liel Liebovitz (Tablet and Unorthodox) on this year’s theme of Life and Death. We learned the basics of Tanach (Torah, Ne’vim, and Ketubim); how a page of Talmud is laid out; and the difference between the Mishnah and Gemara. Liel told us as much as we’d be wrestling with texts, the texts would be wrestling with us.

After a lunch break in the gardens of Industry City in South Brooklyn, we came back together, each giving a brief introduction to ourselves and our projects for this LABA year.  We are a group of visual artists, singers, writers, dancers, composers and actors and the projects reflected our diversity: a clown show, a collection of cemetery 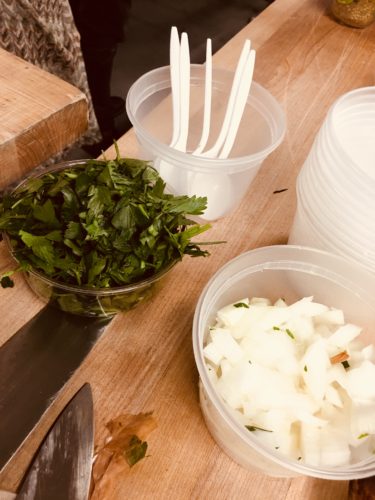 maps, a seder using Negro spirituals and slave narratives. But all the projects were united by theme, and we were united by fellowship, especially as we traipsed downstairs to the industrial kitchen of Colson’s Bakery & Patisserie, where we had our lesson in hummus-making.

We grouped willy-nilly around two long butcher block tables, amidst chattering and laughter: it felt like second grade. Our chef and leader Noam Bonnie (of Brooklyn Hummus) picked one table to grind the chickpeas for the hummus, while the other table prepared masabacha (Arabic for “swimming”), a whole-chickpea sauce.  Pestles were distributed at our table for the mashing, along with four or five aluminum bowls, two or three persons to a bowl. Sometimes one of us would commandeer the bowl; sometimes it was a group effort. We all had different mashing styles, but the end result was the same—a course chickpea paste.

Noam brought around citric acid for the lemon flavoring and salt, advising us to sprinkle a little at a time—to not overpower the dish. We doused with water to thin the concoction, while imbibing our own cups of grapefruit juice and arak (Arabic for “perspiration”), adding to the jolly camaraderie of making a meal together. 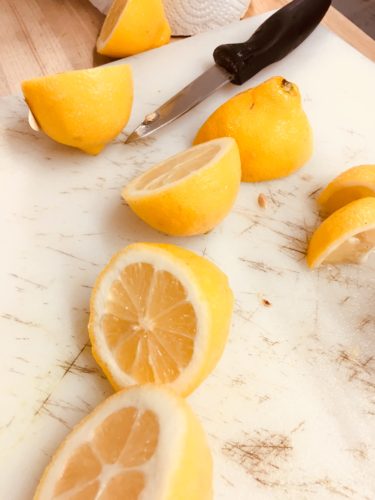 When the tahini came around, a spirited debate broke out among the Israelis in our midst about which was the superior brand. Noam was firmly in favor of Hayona (“the dove”), while Stav, a fellow to my left, did not have much time to defend her choice of Har Bracha Grizim before we were on to the next task.

We crowded Noam at the head of the table as, like an alchemist, he demonstrated how to mix the paste with the masabacha: First, we swirled a spoonful of paste around and around the sides of our bowls. Then we dolloped a fistful of hummus into the center, topping it with masabacha, and finishing it off with a dash of cumin.

And after piping-hot bread came out of the oven (remember: we were in a bakery kitchen), we stacked the pitas atop our bowls of hummus, filed out to the courtyard, congregated around one long table together and dug in, happy to feel accomplished and be as one.

It was not so very different from my 2nd grade experience of peanut-butter-making.  And it synthesized the best qualities of LABA—fellowship, good spirits (in both senses of the word), and intentional effort—a harbinger of a sweet year to come.