Making Holes in the Torah 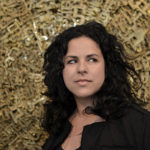 2013-2014 LABA alumna Yael Kanarek is an Israeli-American artist. Kanarek spoke to 2016-2017 LABA alumnus Gordon Haber about her female-centric adaption of the Book of Genesis and her upcoming program at the 14th Street Y’s dusk-to-dawn Shavuot celebration on May 19th. The interview has been edited for clarity.

I have been adapting Genesis in Hebrew and English. I changed all the characters from male to female and female to male. I kept the events but changed the names: “Abraham,” “High Father,” becomes “Emrahamah,” “High Mother.”

It’s really interesting when you swap the women’s names because so many are named after farm animals. It was a way of showing status or prosperity of the household. “Rachel” means “old sheep.” So she becomes “Keves,” Hebrew for “sheep.” “Leah” is something like “wild cow.” She becomes “Par,” Hebrew for “bull.”

The idea came to me many years ago just before Pesach when I was looking at a Haggadah. I realized that women are not mentioned at all. Or the only mention of women in the Haggadah is the Song of Miriam. It was so striking that I never noticed it. This is how embedded in the language it is. We don’t find ourselves in the text. And when we do, it’s primarily as wombs to make baby boys.

I tried playing with gender and text at a few seders. It made some of the older men, the more religious men, uncomfortable. People get annoyed when you mess with their traditions. But some women were really inspired by that.

I felt at some point with my own spiritual process that I was hitting a wall with my ability to identify with core texts. I stopped seeing myself in them. In the second chapter of the Book of Genesis, Adam is created in [God’s] image, encompassing both male and female. I asked myself what would happen if I turned the genders around: Eve is created in the image of Elohin and encompasses both female and male. Suddenly a door opened in my experience to identify with the narrative — I’m a woman and I encompass both female and male.

One of the more interesting passages was the circumcision of Abraham. In my version, male circumcision becomes female circumcision. It immediately makes a very strong impression because there is revulsion against it, but shouldn’t there be the same revulsion for male circumcision? Instead of the foreskin, I picked the word dagdegan [tickler] or “clitoris,” which etymologically is related to tickling. The source is Arabic.

“Female” in Hebrew is nekevah, a word related to “holes.” Lenakev in Hebrew is “to make holes.” So I have as a title Nikuvei Torah, “Making Holes in the Torah.”

At the Tikkun, at 9pm, I have a program with Rabbi Marisa Elana James; she’s also a cantor and she will be chanting chapter two of Genesis, about the creation of Eve. I will talk a little but about what drove me to do this. We’ll read a few pieces of it and have a conversation about it, and we’ll bring portions of text so people can do their own re-gendering in Hebrew. 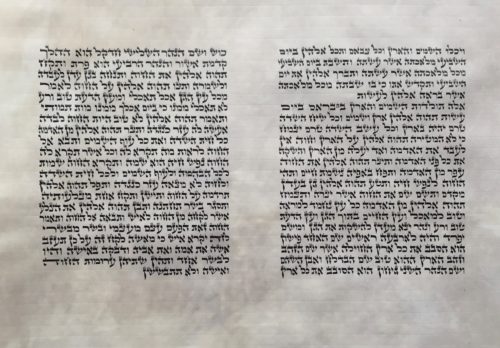 Yael Kanarek‘s creative practice centers on multilingualism and the cultural associations of language. Her work has been exhibited in Tel Aviv, Rome, and Istanbul; in the Whitney Biennial; and at The Drawing Center and the Jewish Museum in New York.