Israel at 70: LABA Fellows Look Back with Longing and Sorrow

On the occasion of the Jewish state’s 70th anniversary, we’ve asked our LABA fellows with Israeli backgrounds for their perspectives.

Israeli-American composer and multi-instrumentalist Tal Gur was born in Israel and grew up in an Air Force base in the valley of Jezreel, where the sounds of combat aircrafts taking off the ground and the sights of fertile plains have influenced his curiosity.

I remember as a child growing up in Israel, relatives from America visited once a year. They were the “uncles from America,” bringing a spirit from another place as well as fresh visual and auditory stimuli such as music and movies. I found myself drawn into a dream of possibilities, wealth and maybe freedom.

As for them, they loved Israel; I believe they still do. I feel it’s a certain love with a sense of gratitude to us who were maybe living the dream, risking our lives for one versions of the Jewish- American dream.

Back to a memory: a still image of myself and my siblings with our relatives from America, standing next to a soccer field in the Air Force base where I grew up. One relative is wearing a t-shirt with the phrase: Israel Isreal.

Israel is seventy years old, and she is definitely real. I miss her, I’m longing for her, I want to pave my way back to her arms. However, there’s no dream at the moment that associates Israel with liberty and justice for all. She is maybe too real and cynical, hiding behind invented masks of security and politics.

For your birthday Israel, I wish to you remember to have a good sleep sometimes, so you can dream deeply, then wake up and inspire us to be more independent, or less dependent on the terms that guided your magnificent and first version of the Zionist dream.

I love you but I want to love you more. I want you to love us all, love thy Arab and Palestinian neighbor. I dream that if we will seriously take the Jewish idea of “seek peace and pursue it,” then we maybe we can let go of the idea of a Jewish state? 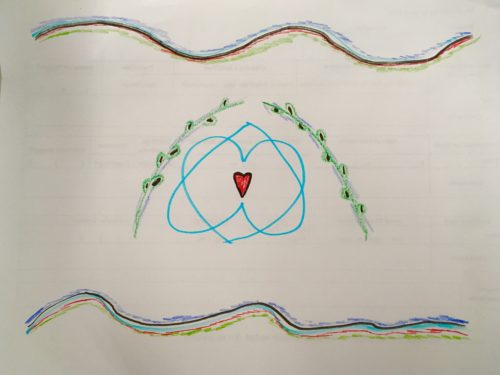 Tal Gur, “A Sketch for a Future Flag”

As part of her LABA project, playwright Zohar Tirosh-Polk is embarking on a year-long process titled The Israel Plays: A Tikkun Cycle. Tirosh-Polk’s six plays engage with key events in Israeli history, such as the Independence Day War, the Six-Day War, and the Second Lebanon War. These plays confront Israeli history, memory, trauma, and the cycle of bloodshed in the Middle East. Throughout the next year, beginning with Israel’s 70th Independence Day, the plays will be read, workshopped, re-imagined and produced.

“We must look back in order to move forward,” has been my guiding principle as I’ve been creating these plays in the last decades. The idea of a cycle excites me because it keeps thrusting me back to the center of the work as I search for new and exciting connections between the plays. A cycle also suggests links to the past, as in the annual Jewish cycle of celebration and commemoration, as well as to the future, as in the hope of creating a very different cycle than the one we’re trapped in now. During this 70th year, I am deeply moved by the idea of Tikkun: a reckoning, a repair and a prayer.

Below is a taste from one of the plays, Theo’s Dream. 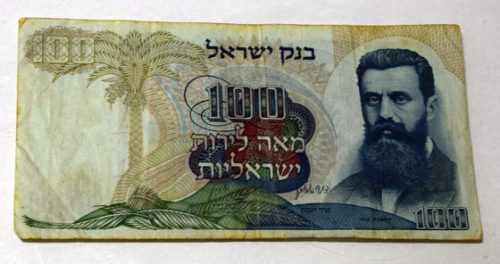 Scene 5: Theo is on his deathbed. Julie, his wife, is with him.

JULIE
We know, Theo. We know.

JULIE
There isn’t much now.

THEO
And happy strong people walking around
laughing.
Bathing in the blue sea.
Eating watermelons
And
Schnitzel with ketchup.

THEO
I can see it all.
(Pause)
I think.
Camels and trucks
Universities.
Hospitals.
After all we have too many doctors.
Ha, ha, ha. And lawyers.

JULIE
Theochen. You really do need to rest now.

THEO
Julie, they’ll have a city named after me. I’m sure.

THEO
And a mountain too, in Jerusalem.

JULIE
Whatever you say.

THEO
And birds, I can hear the birds chirping in the hot morning sun.
(Pause)
Can you imagine it, Julie?

JULIE
You are the disappointment of my life. But I love you more than words can say.

(A Nazi soldier appears in the doorway.)

Lights on the little girl swinging in the orange grove. She is singing.

(Both of us are hanging on between the heavens and earth)