LABAlive (and in my dreams!)

LABAlive I: War & Peace on 3.22.18 featured works-in-progress by three of LABA’s current cohort. Fellow Jon Adam Ross returned from the show caffeinated, disquieted, elated and eventually superpowered. Here he reflects on his experience.

I’ve been having trouble sleeping. Maybe it’s all the coffee, or maybe it’s the nightmares about pathological grandmothers escaping boxcars during the Holocaust while wearing dog masks and superhero capes. Ambien has met its match, and its name is LABAlive.

This past week I had the amazing opportunity to see works-in-progress by three of this year’s LABA fellows. First up was Brandon Woolf’s heavily caffeinated Righteous Mud. The piece began with percolation, literally. We sat there in silence along with a seated, endlessly patient man (Matthew Korahais), waiting for coffee to brew in an electric coffee machine. Before long, the coffee was dripping and the man on stage began a conversation with a woman (Linda Mancini) about a construction problem that needed attention. Or was it something else? The conversation was just vague enough to let our imaginations extrapolate, just weird enough to allow faint memories of Godot to seep into the story. No matter the root cause, they were stuck in this place until decisions about fixes could be made. Decisions that would be made, of course, over cups of coffee. Lots of coffee. More bodies entered the space wearing all-white jumpsuits and dog masks. Each held an electric coffee maker. By the end of the piece — which startlingly and excitingly became a musical two-thirds of the way through — the audience was enrapt in a moving, surreal happening of caffeinated oddity. 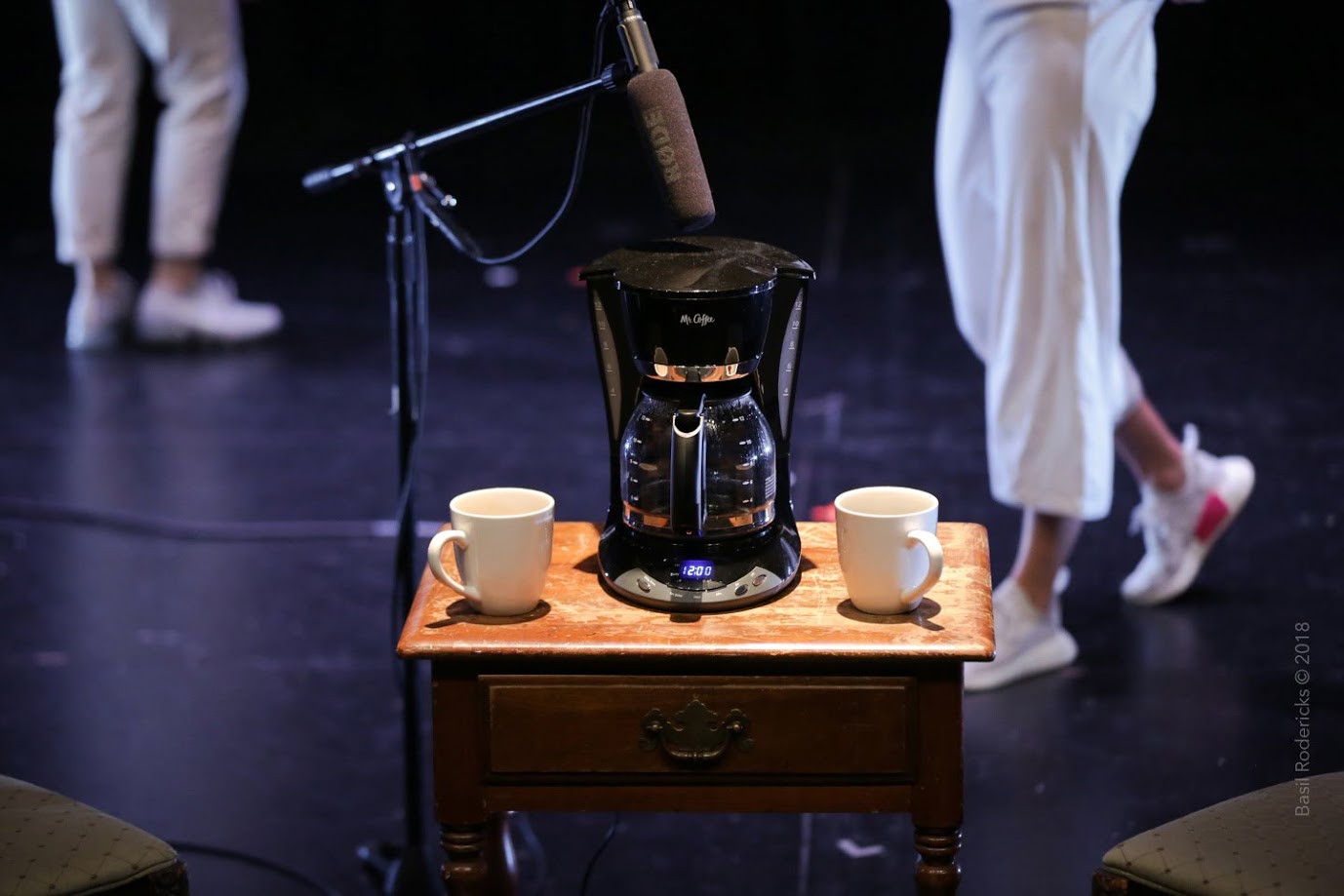 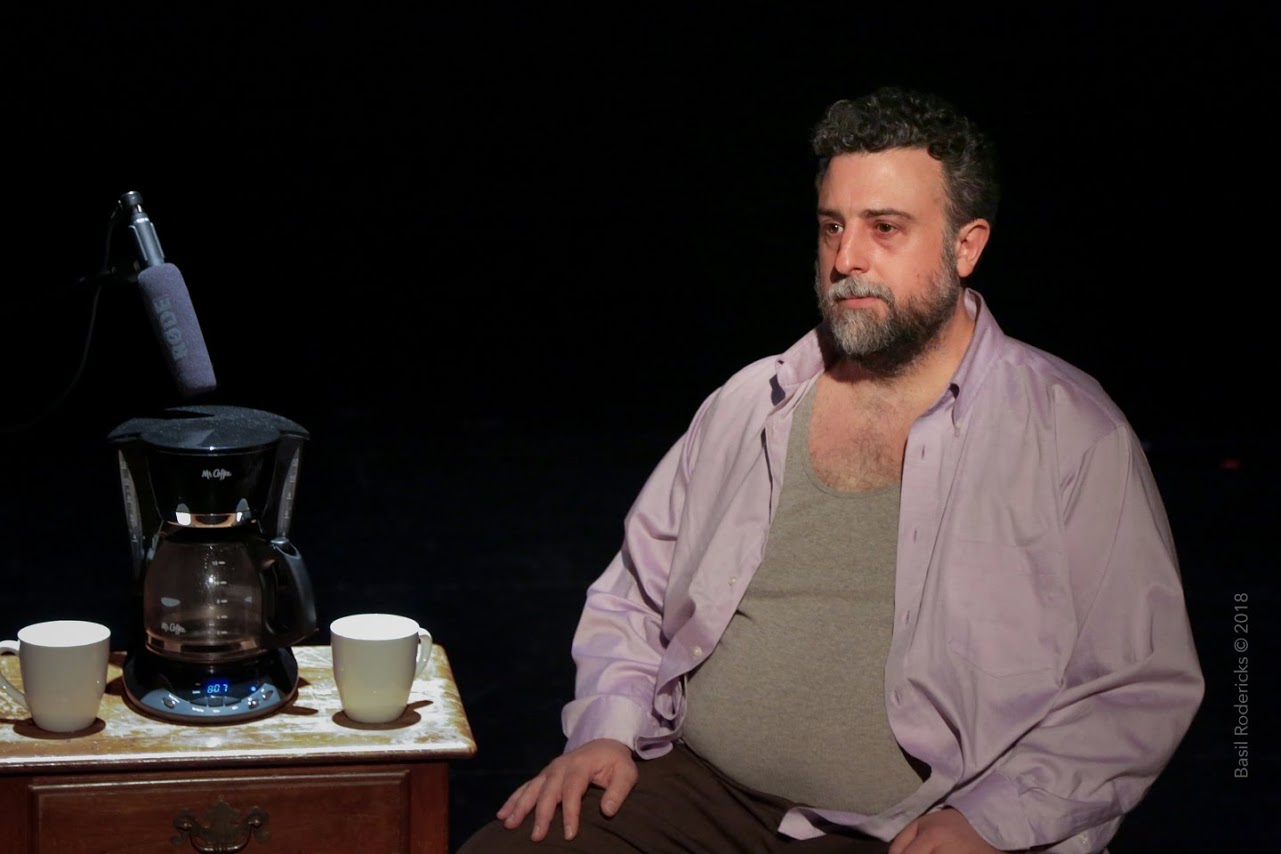 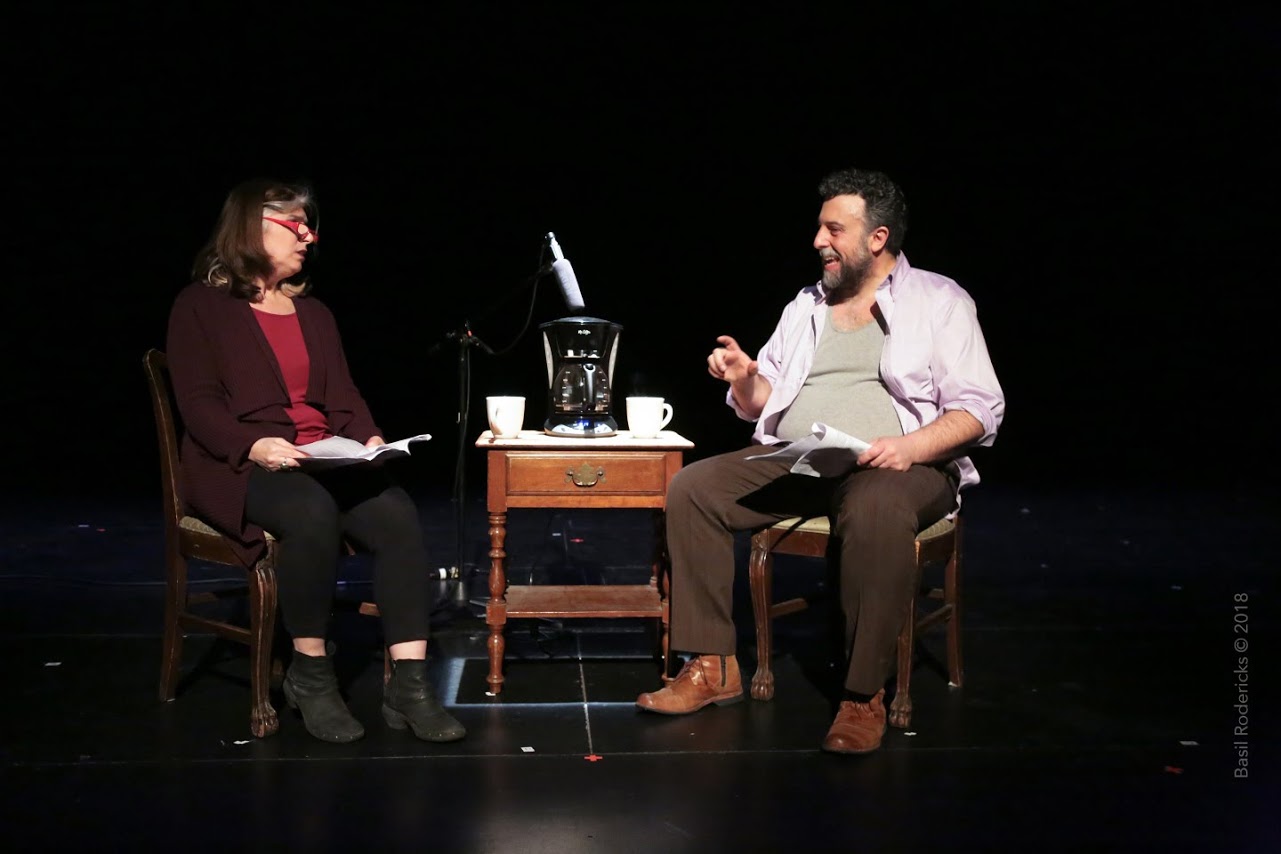 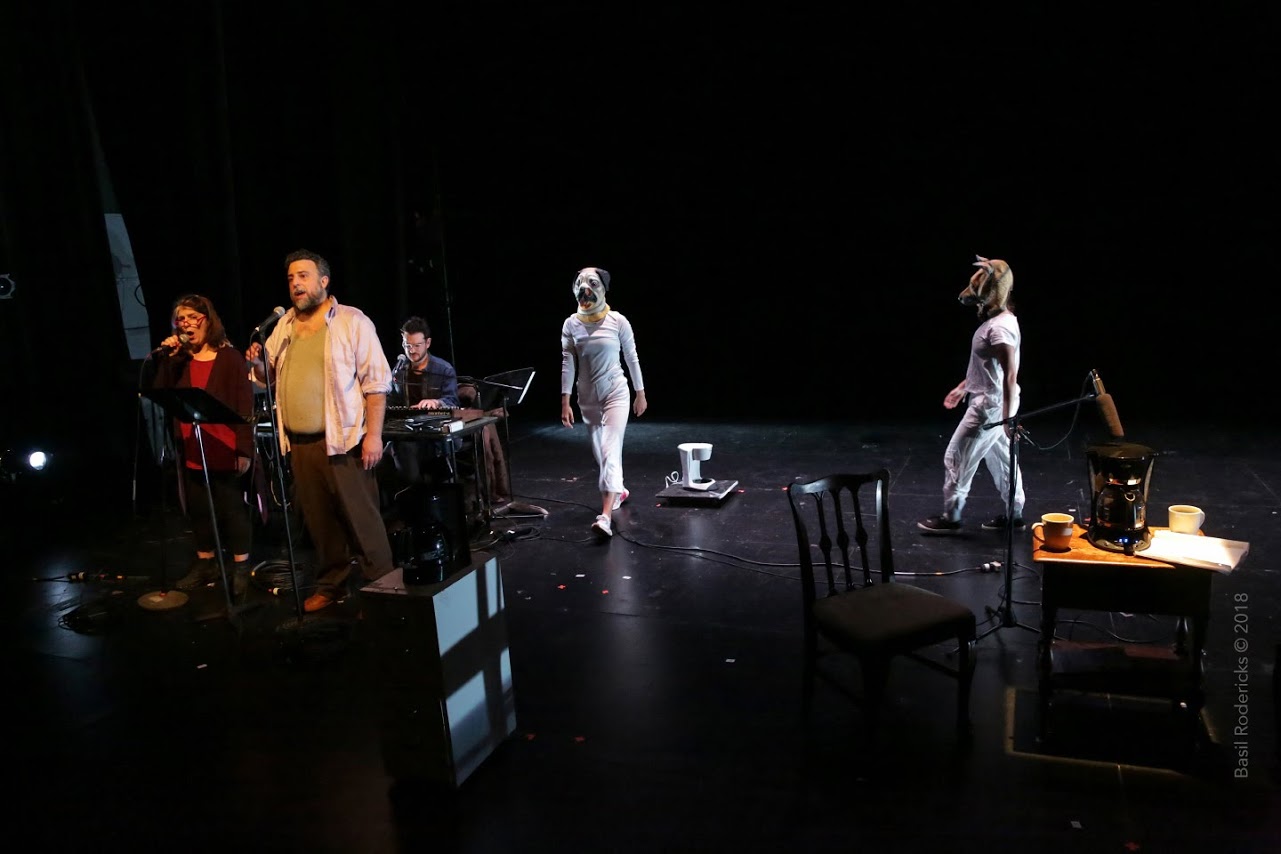 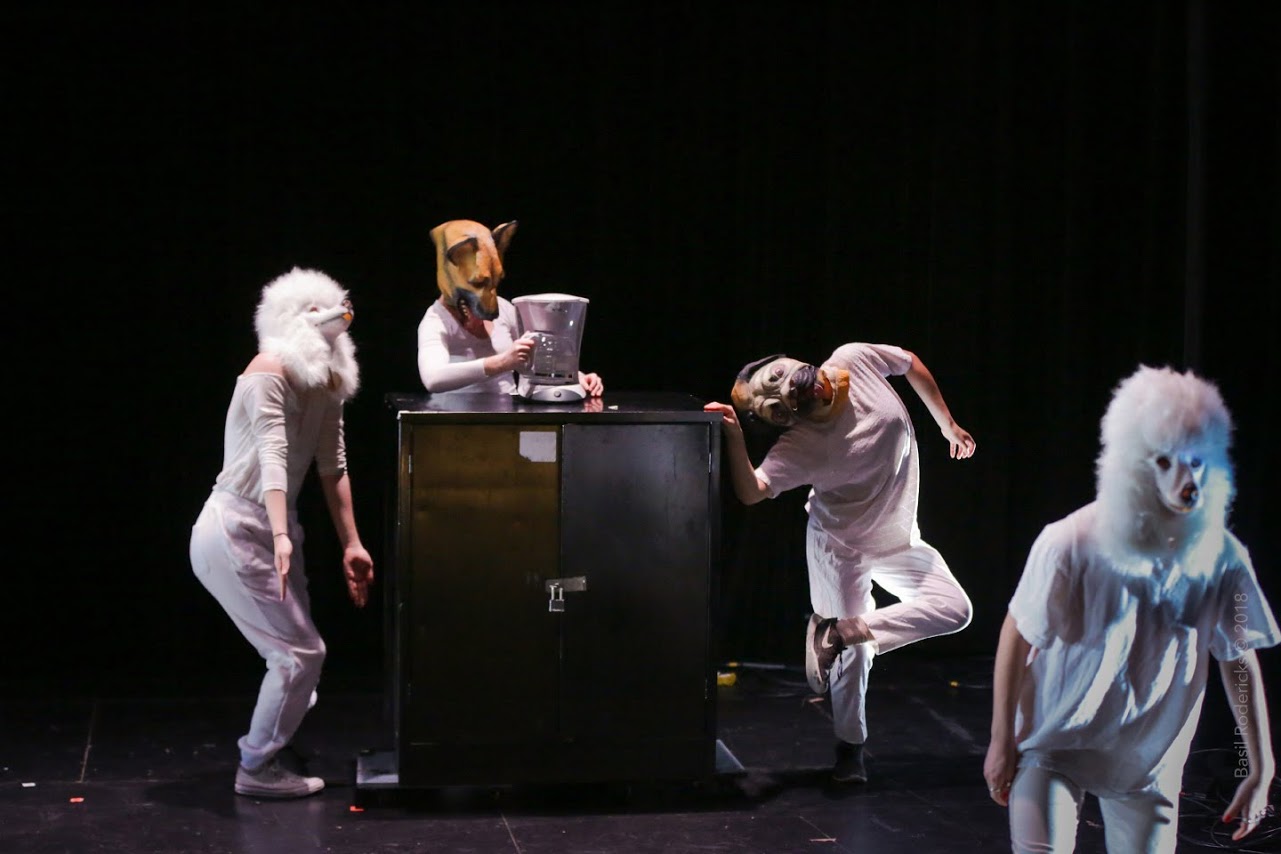 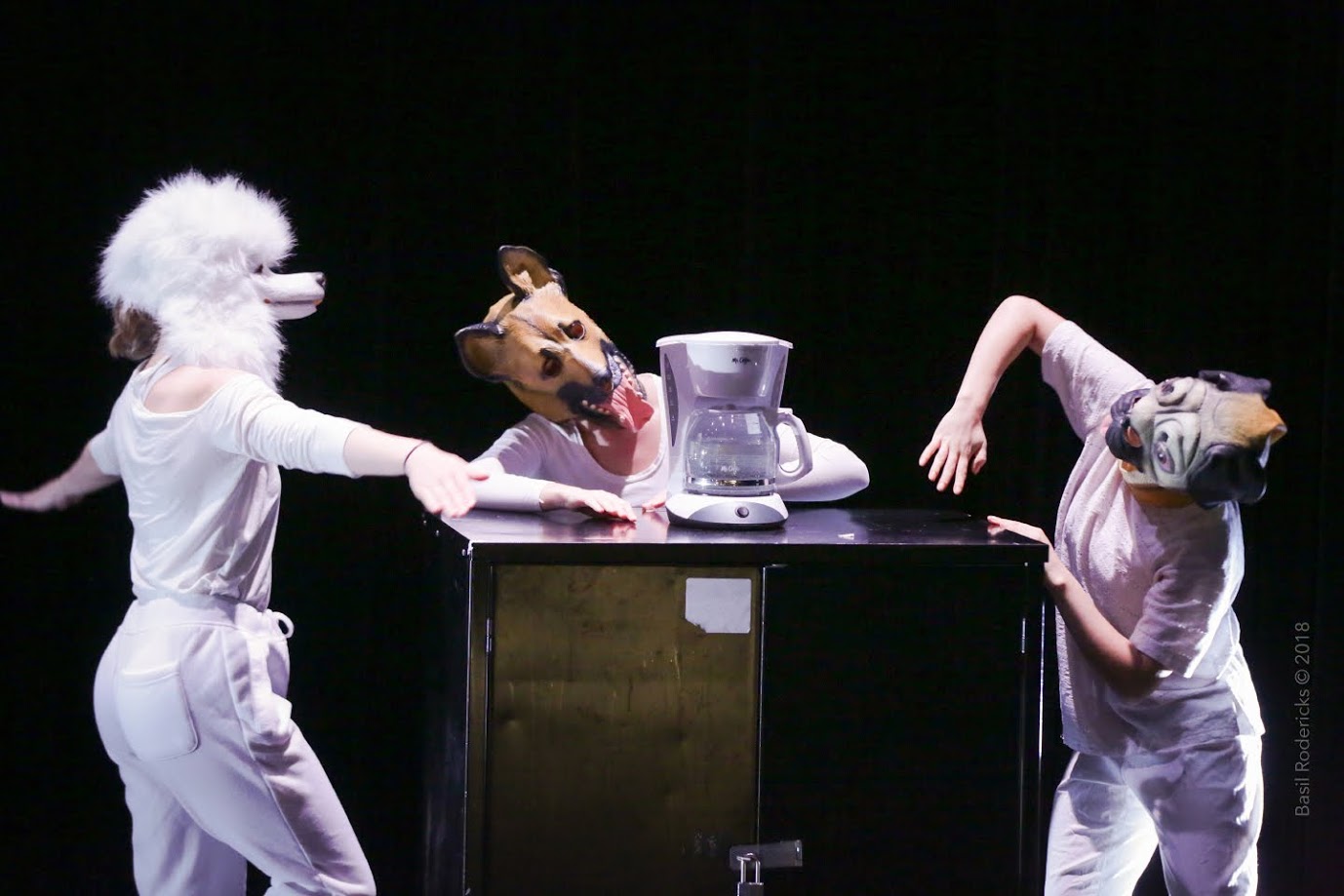 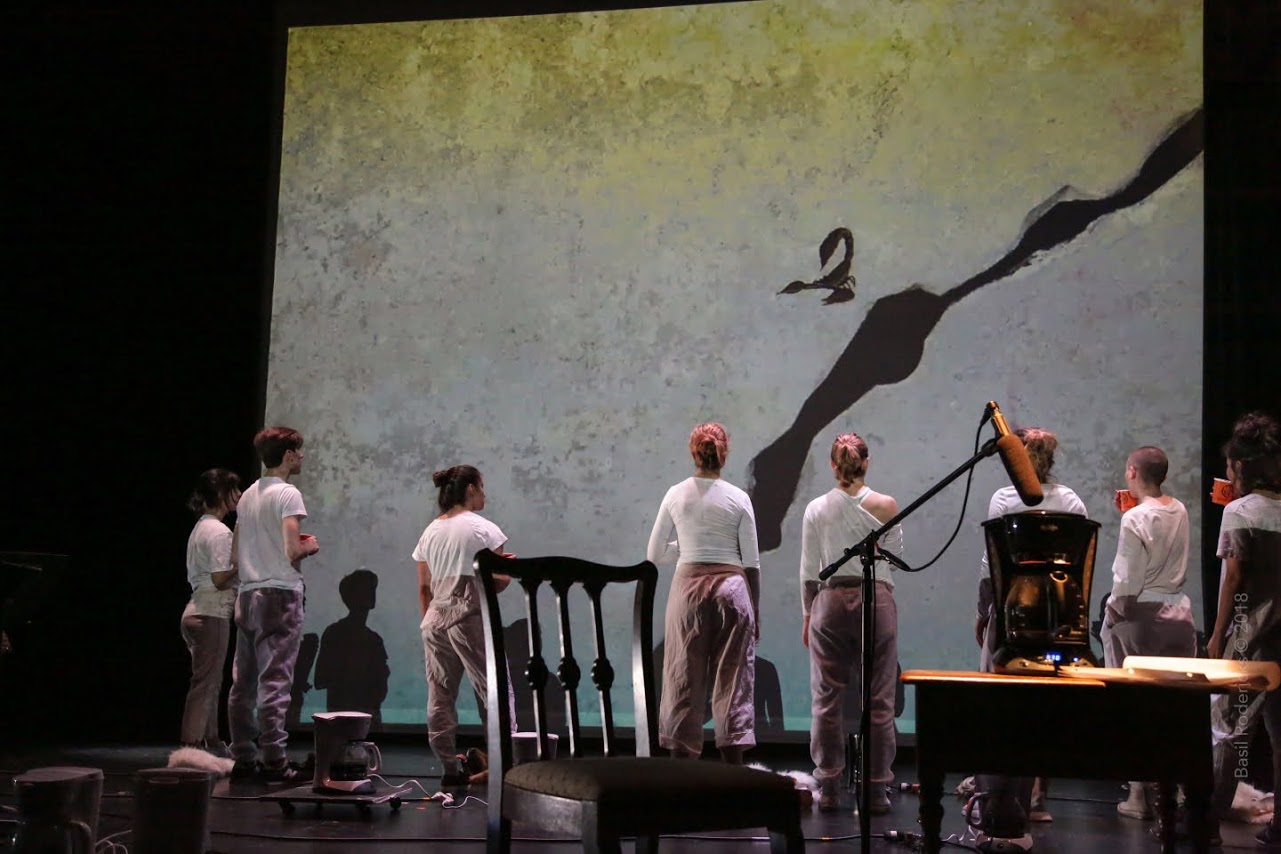 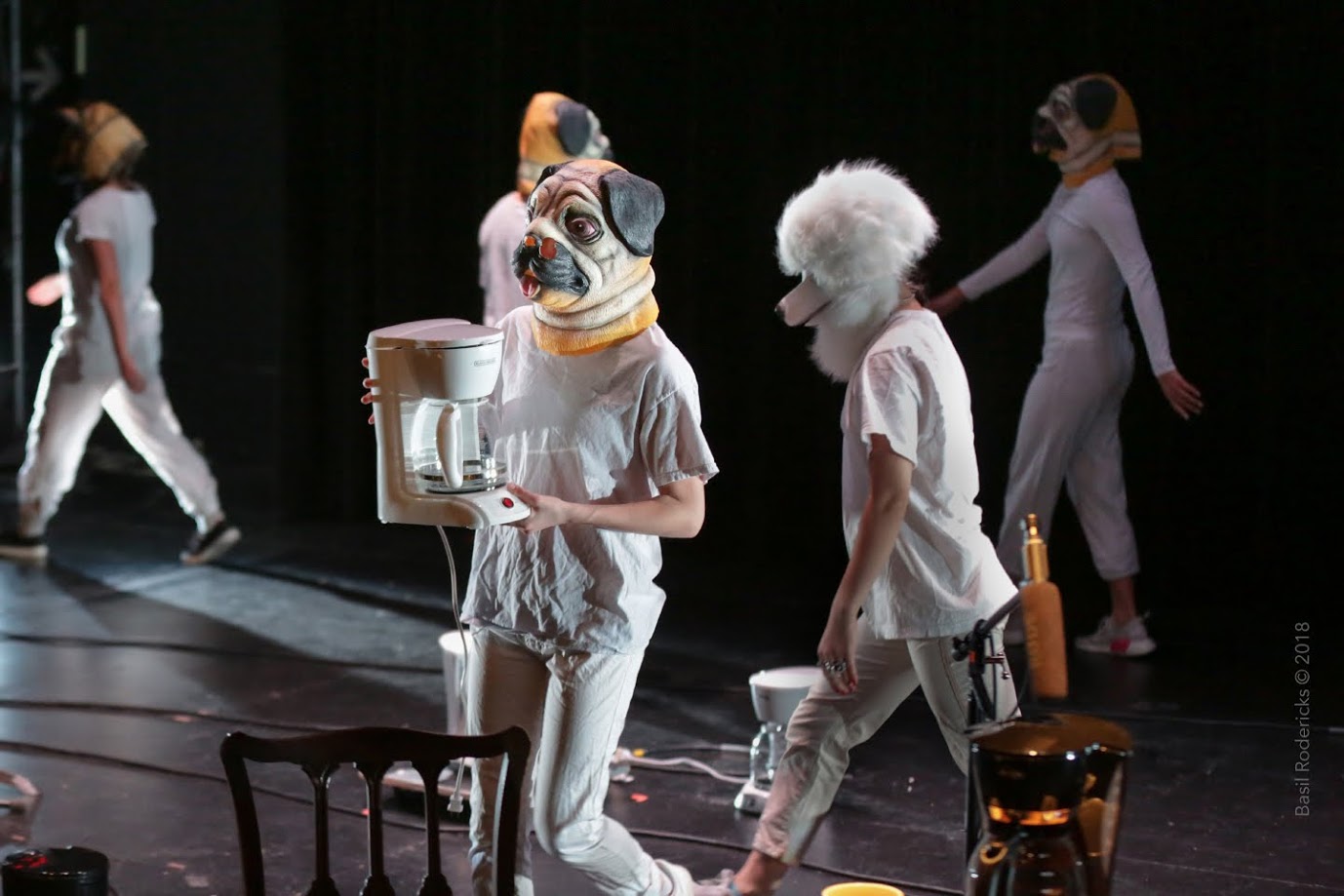 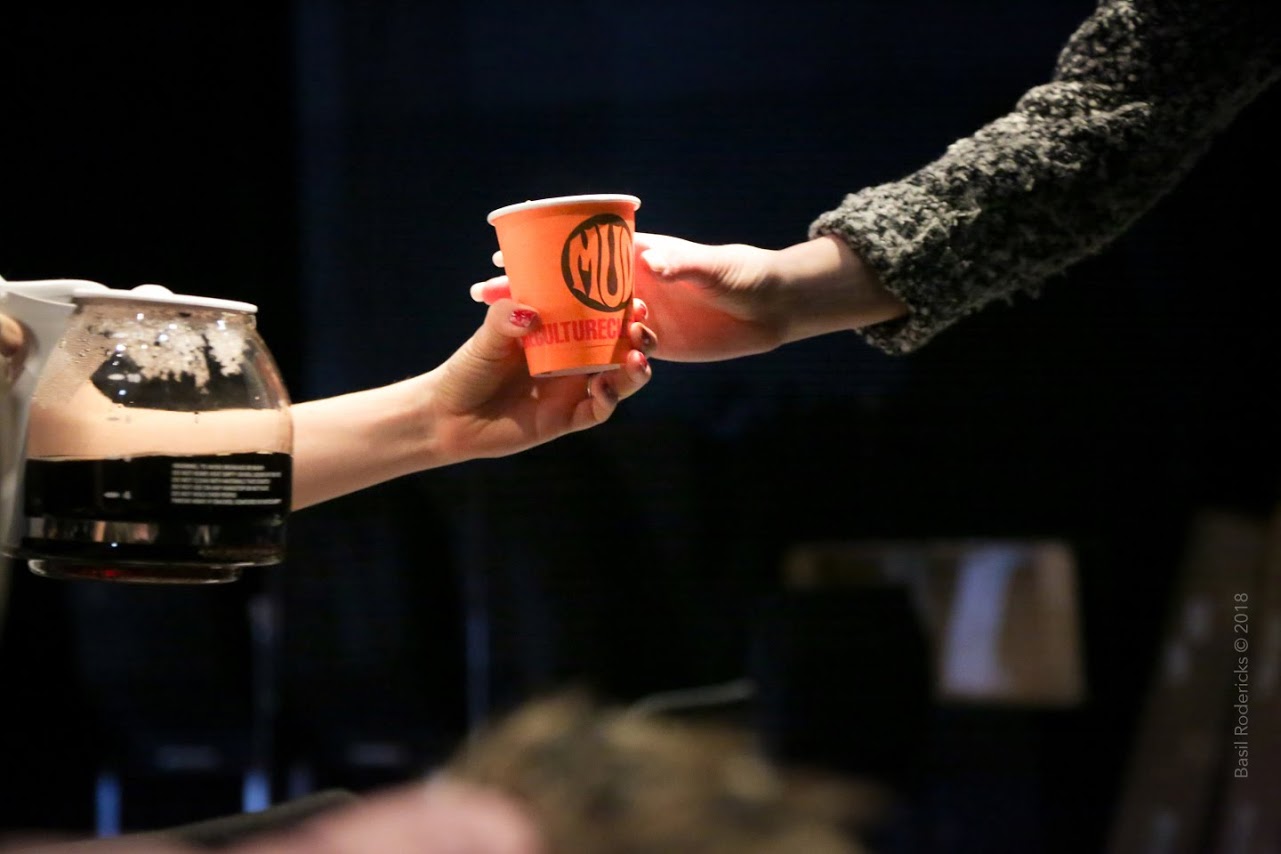 We then got to experience the inside of artist Tal Beery’s psyche with and those black braids, a meta-exploration of his late grandmothers (false?) memoir of escaping the Holocaust. Audience members were invited to interrupt the re-enactment of the memoir (which was honestly and movingly performed by Tatyana Kot and Ido Badanjak) with their questions and complaints. The questions came from audience members pretty early on. The complaints mostly came from Tal’s family members, some of whom took issue with his questioning the validity of the memoir. It got uncomfortable, but in a Marina Abramović kind of way. Every moment of the piece was raw and real and believable, regardless of the reliability of the source text. I was exhilarated when it was over. 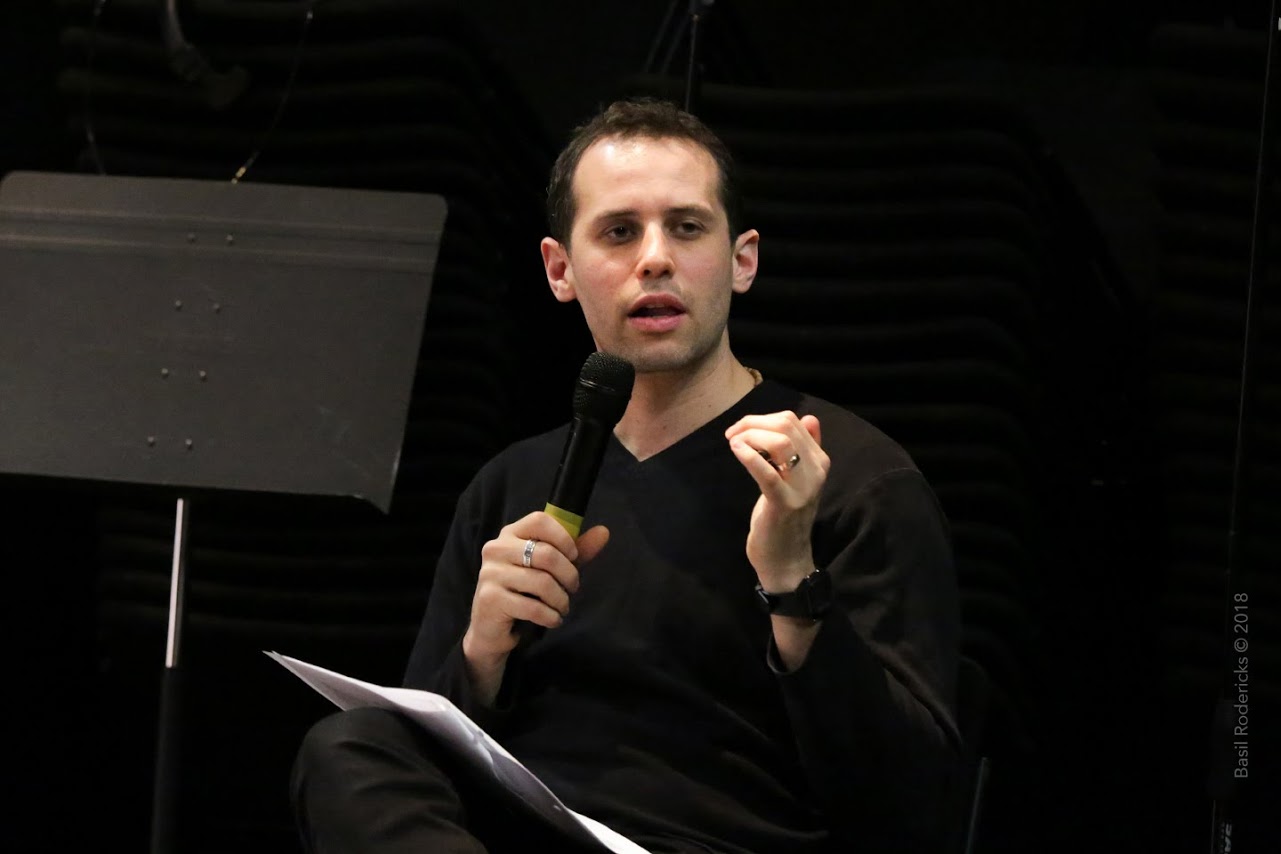 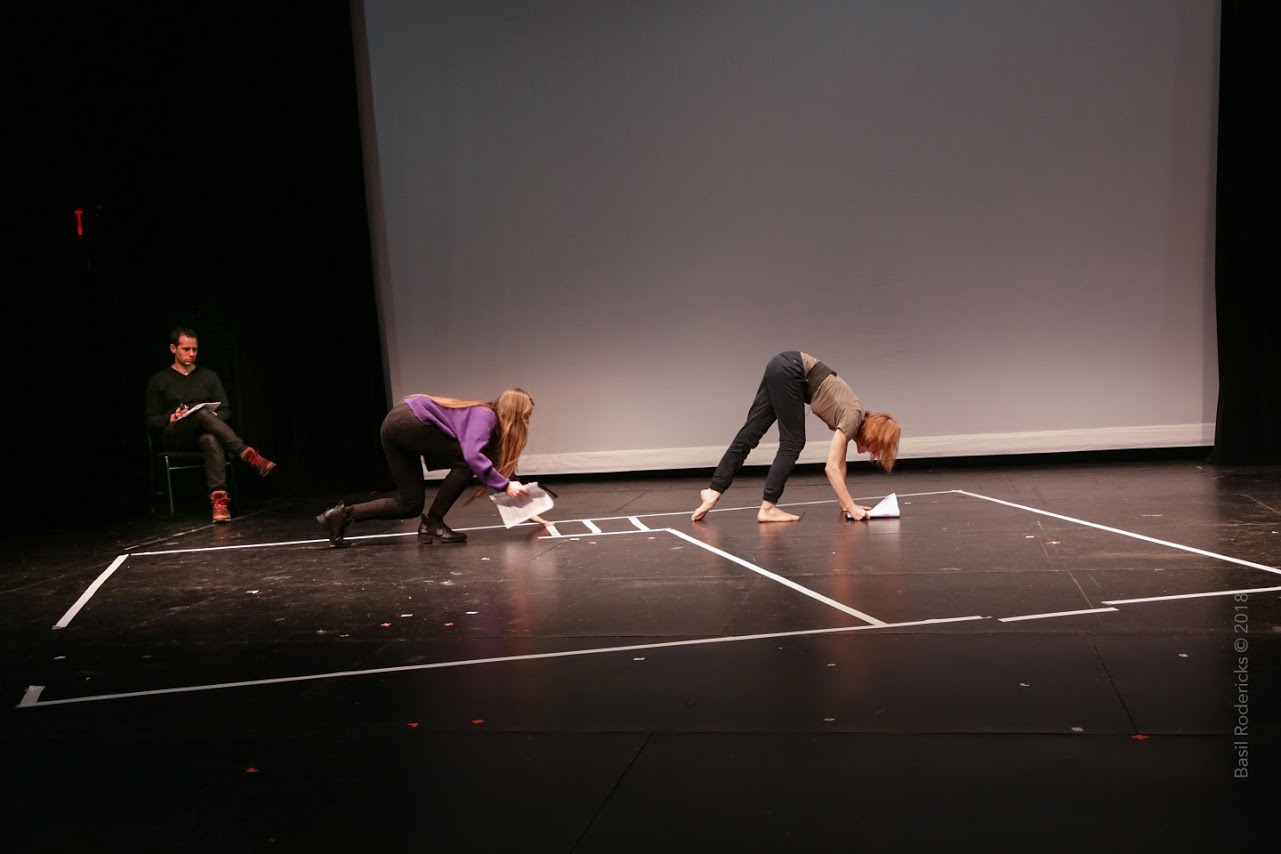 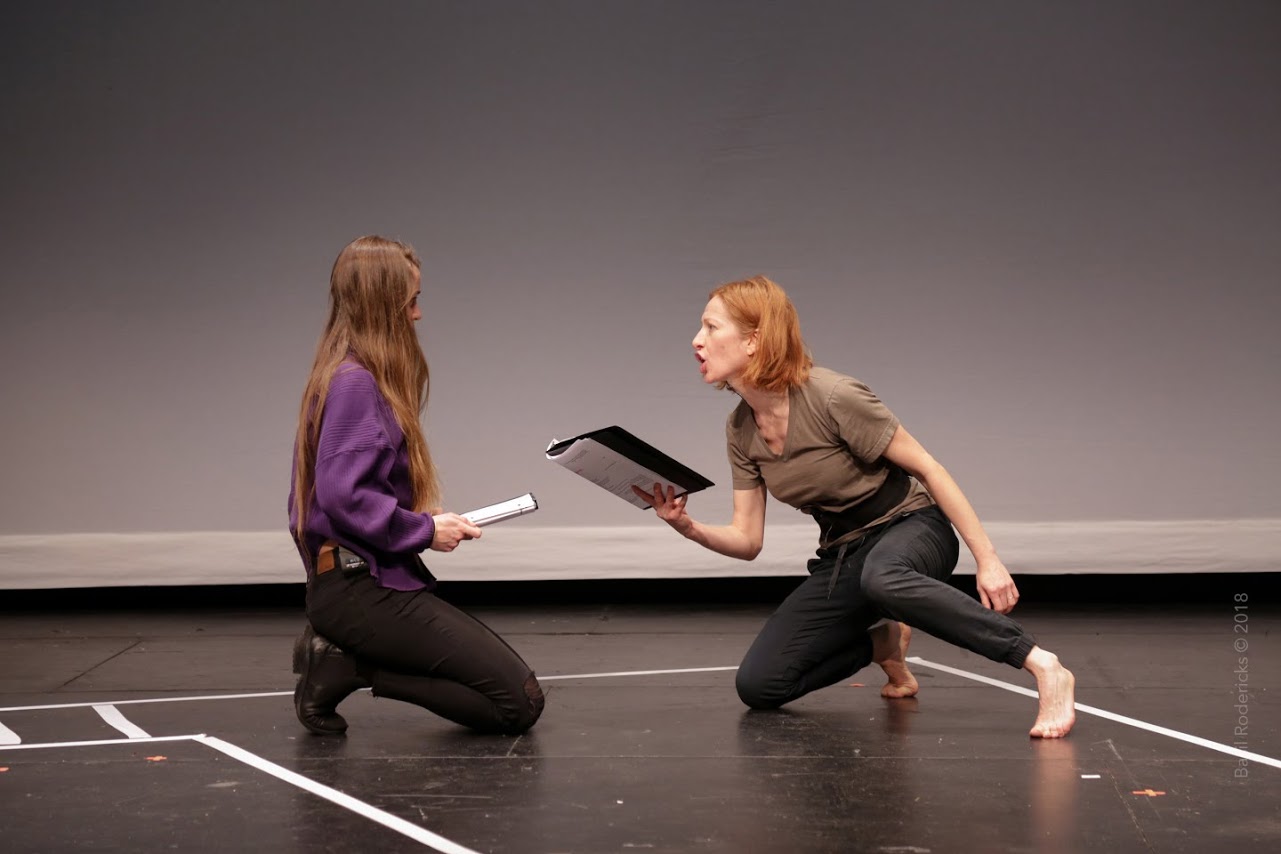 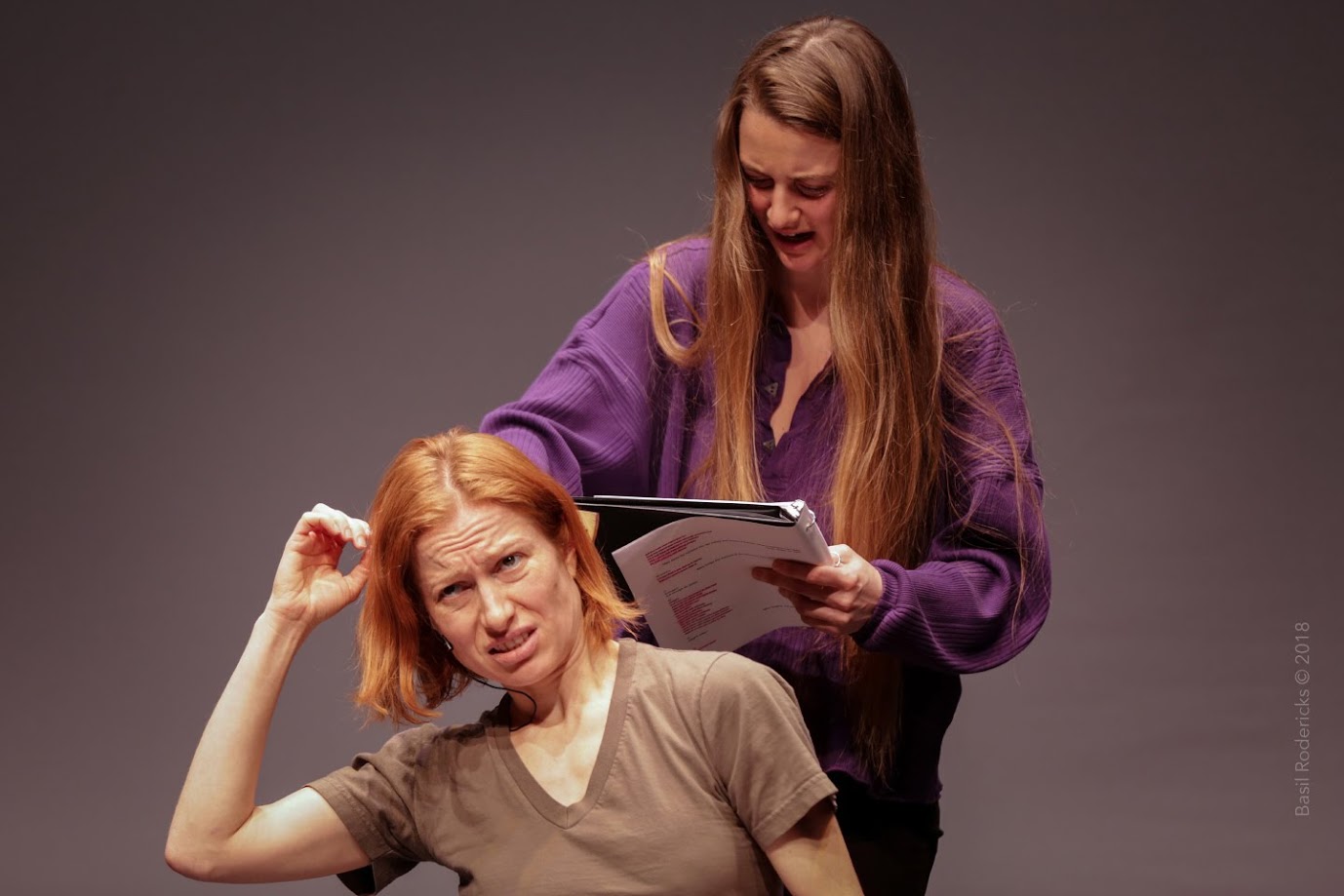 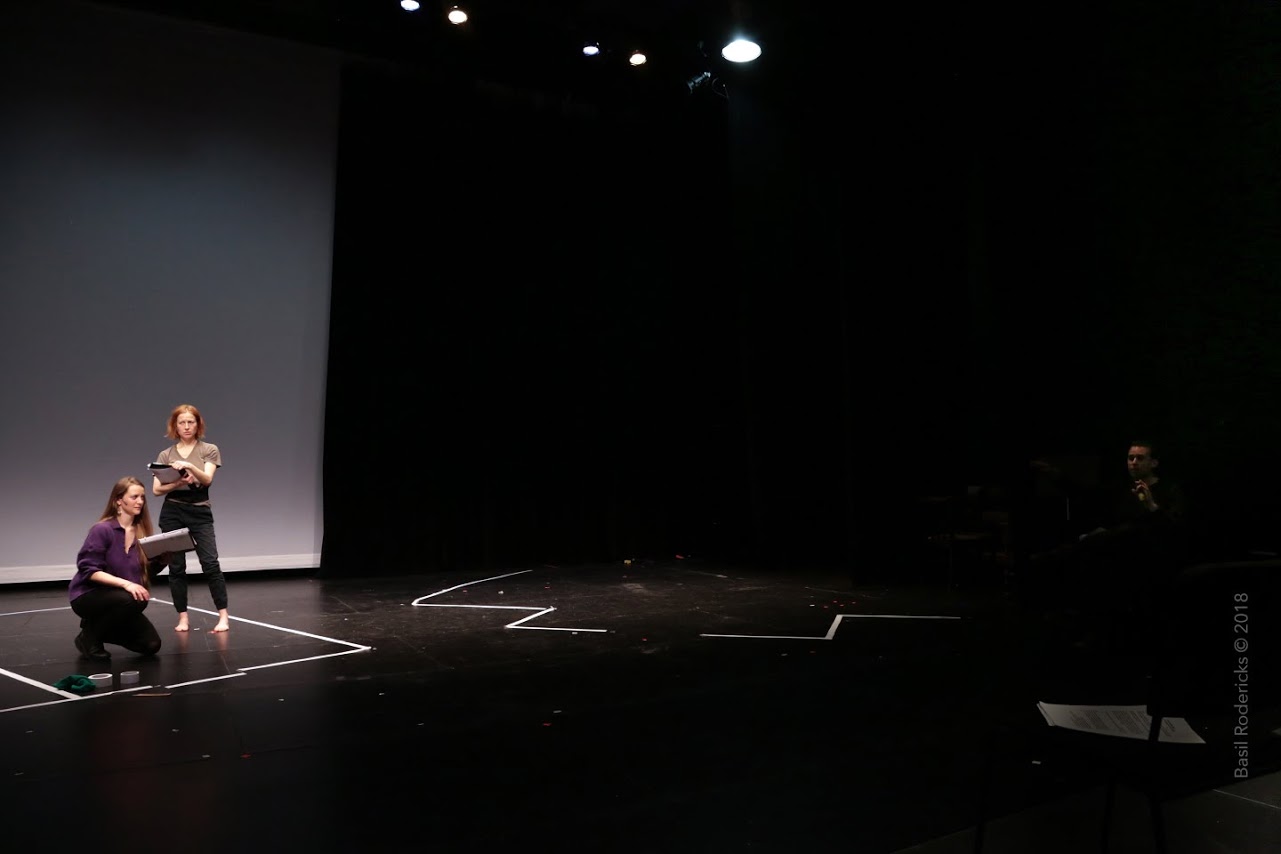 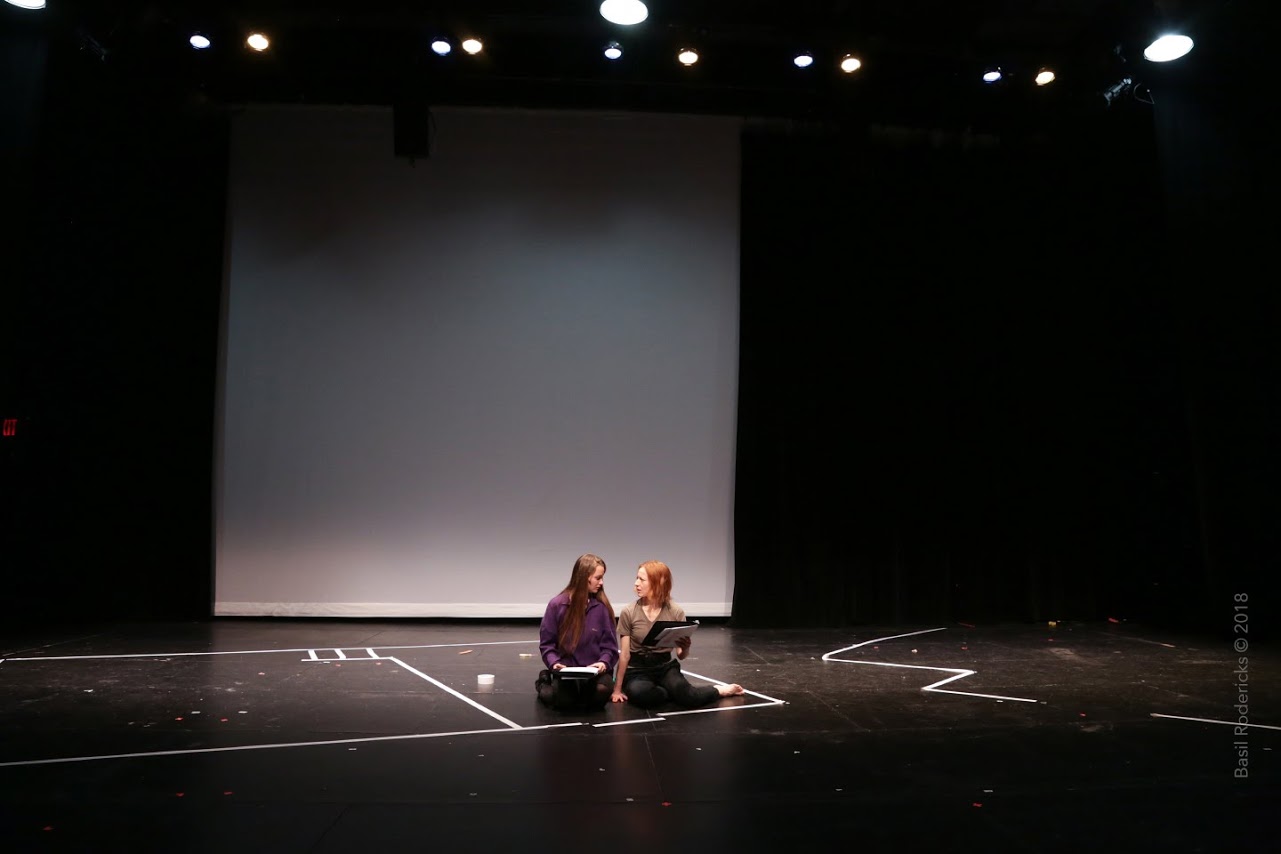 Speaking of reliable sources, we can always count on kids to be profound and entertaining at the same time. Jess Honovich’s Super Play was documentary theater at its most innocent. Jess interviewed preschool kids about superheroes, asking them to identify traits, skills, and favorites, among other prompts. The result was a terrifically funny and incisive exploration of the minds of little kids trying to wrap their heads around magic. And that endeavor in itself became a feat of theatrical magic. 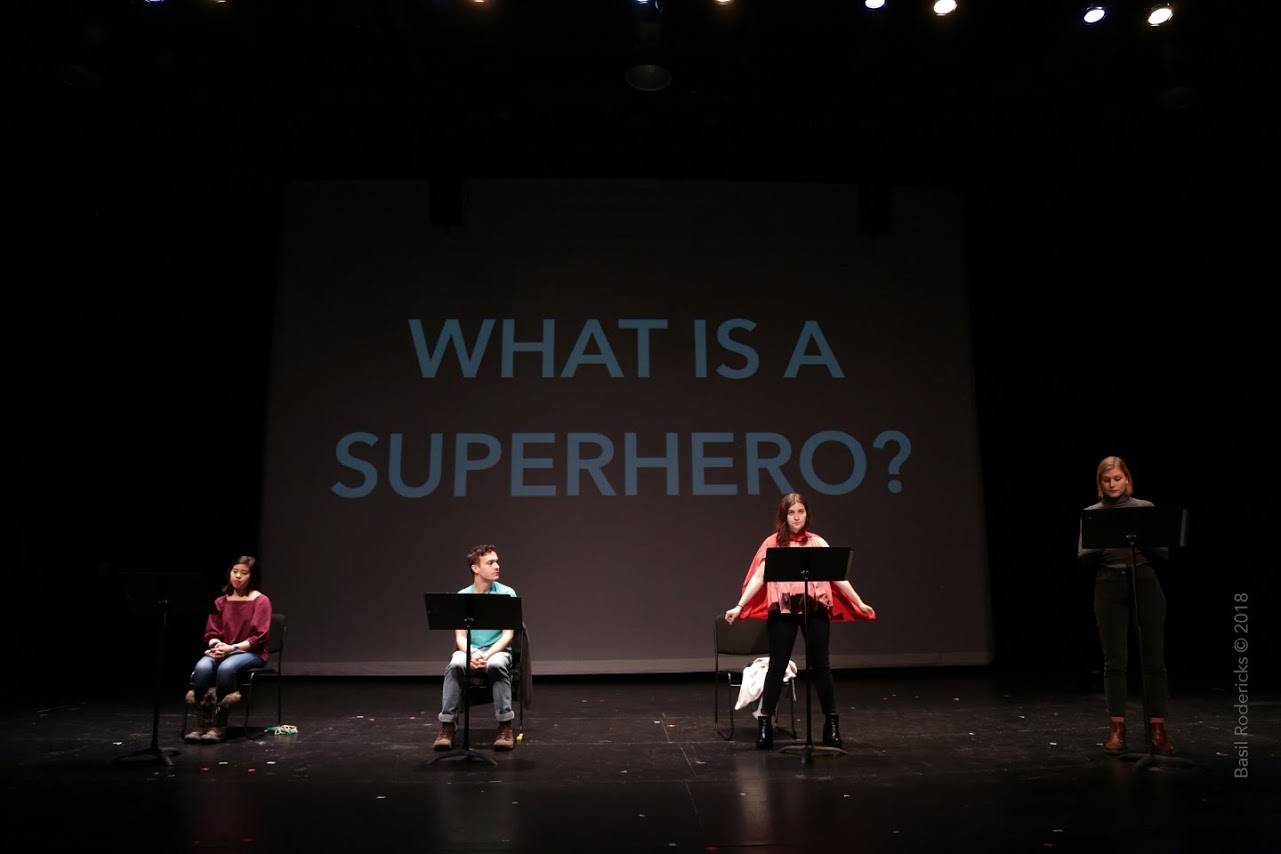 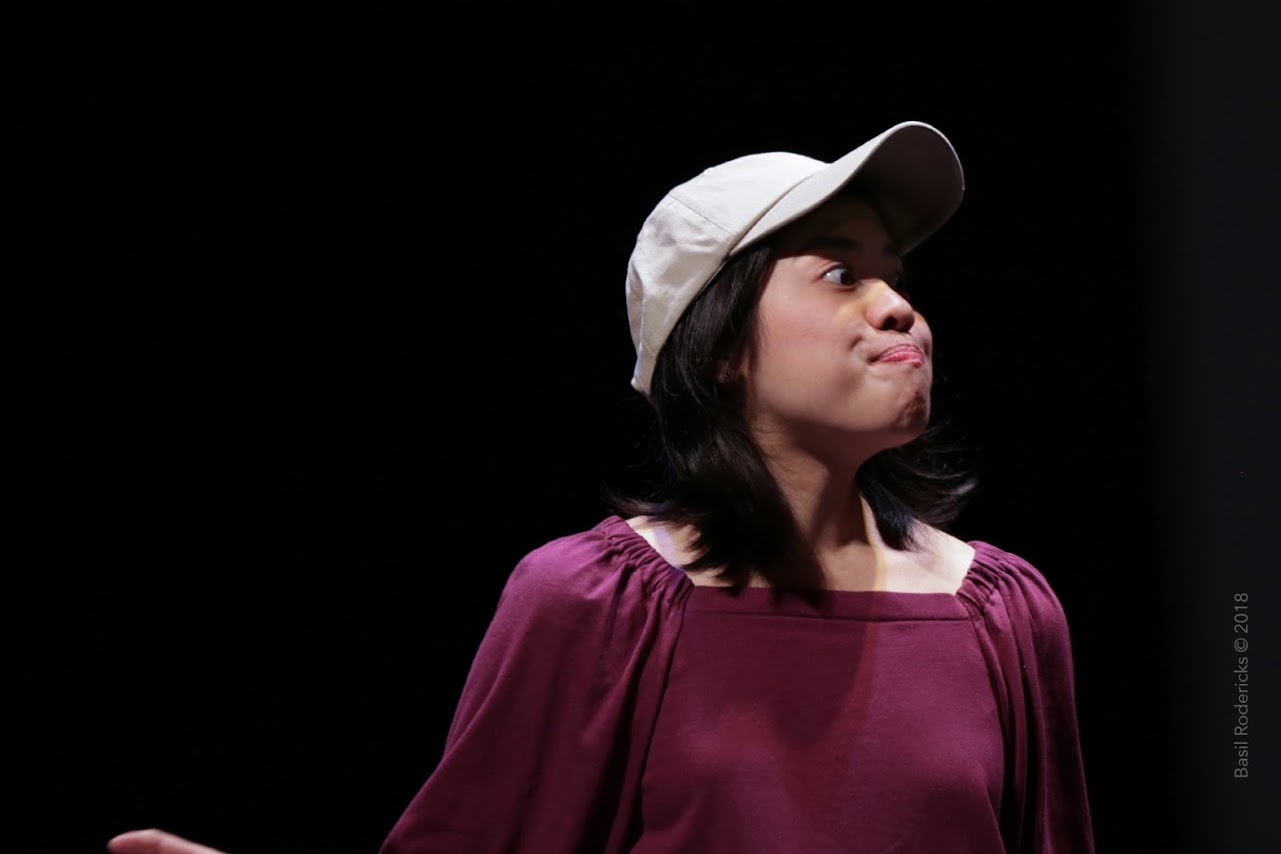 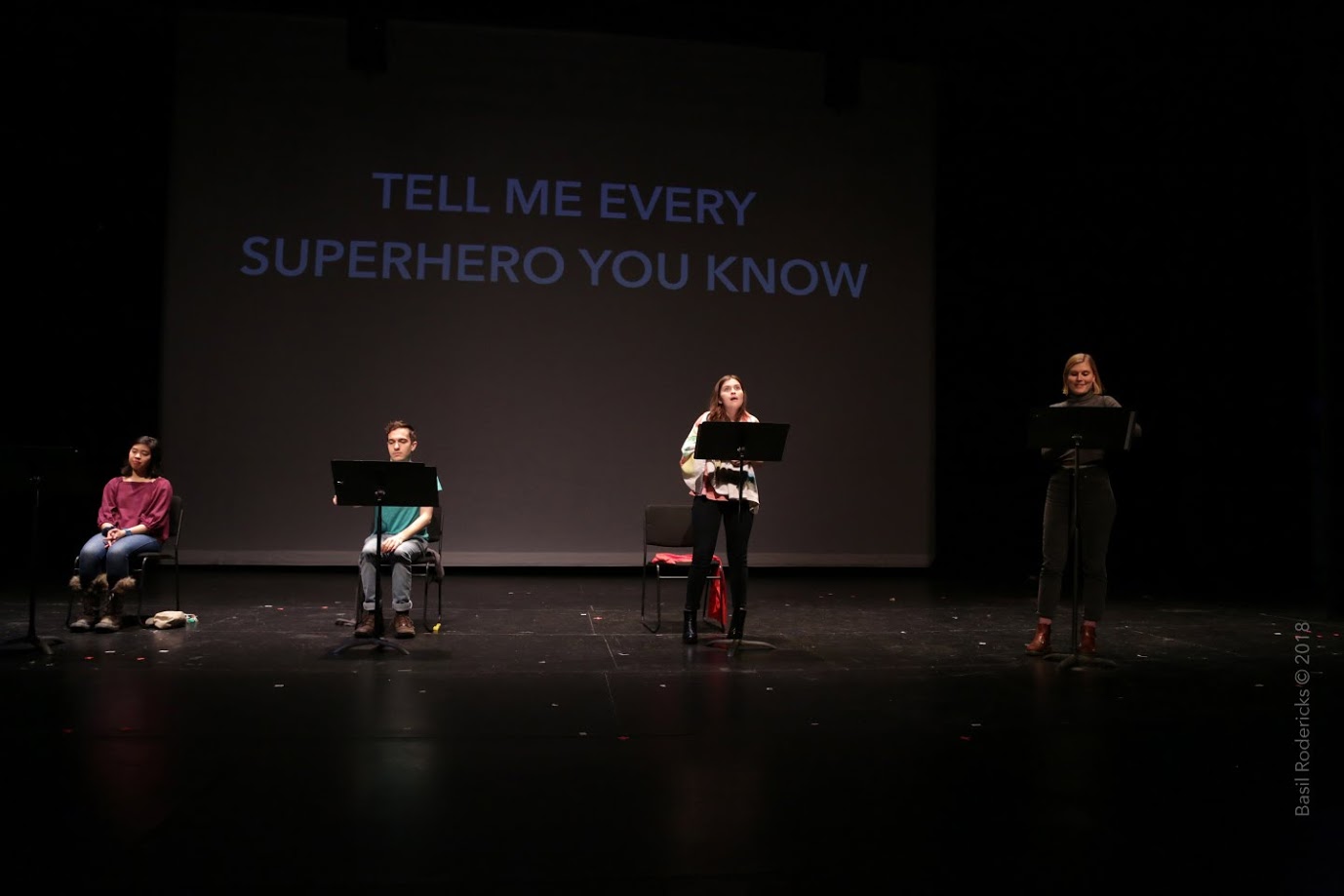 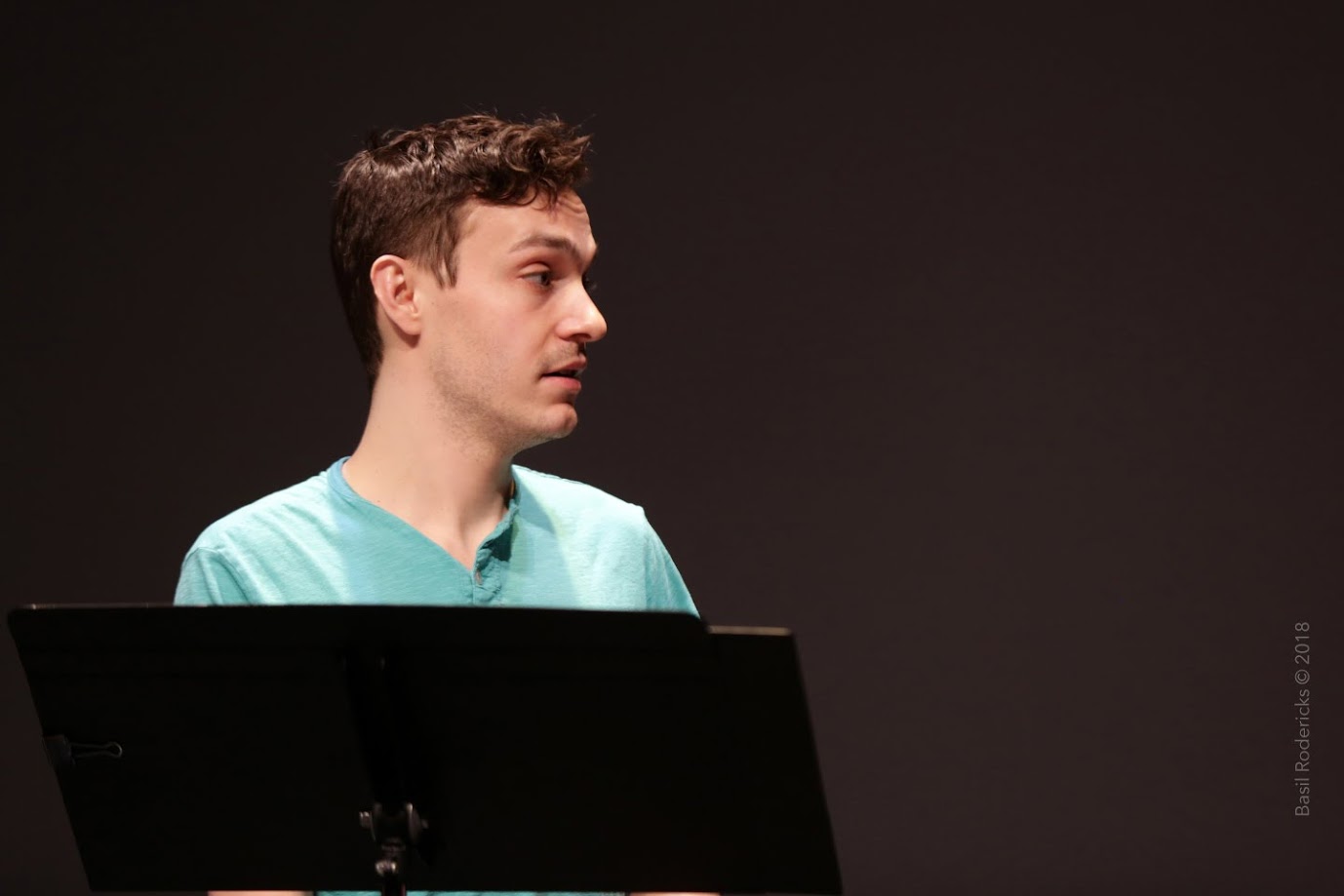 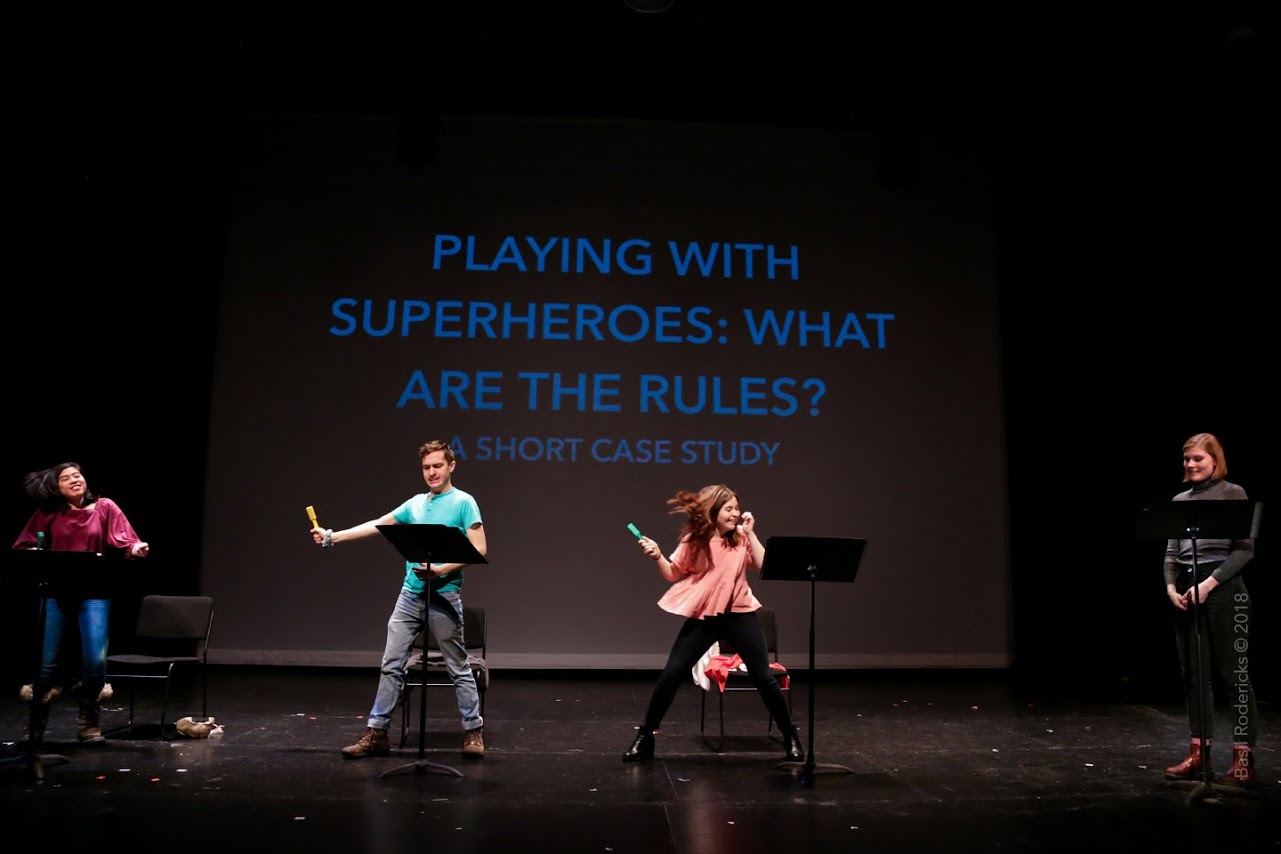 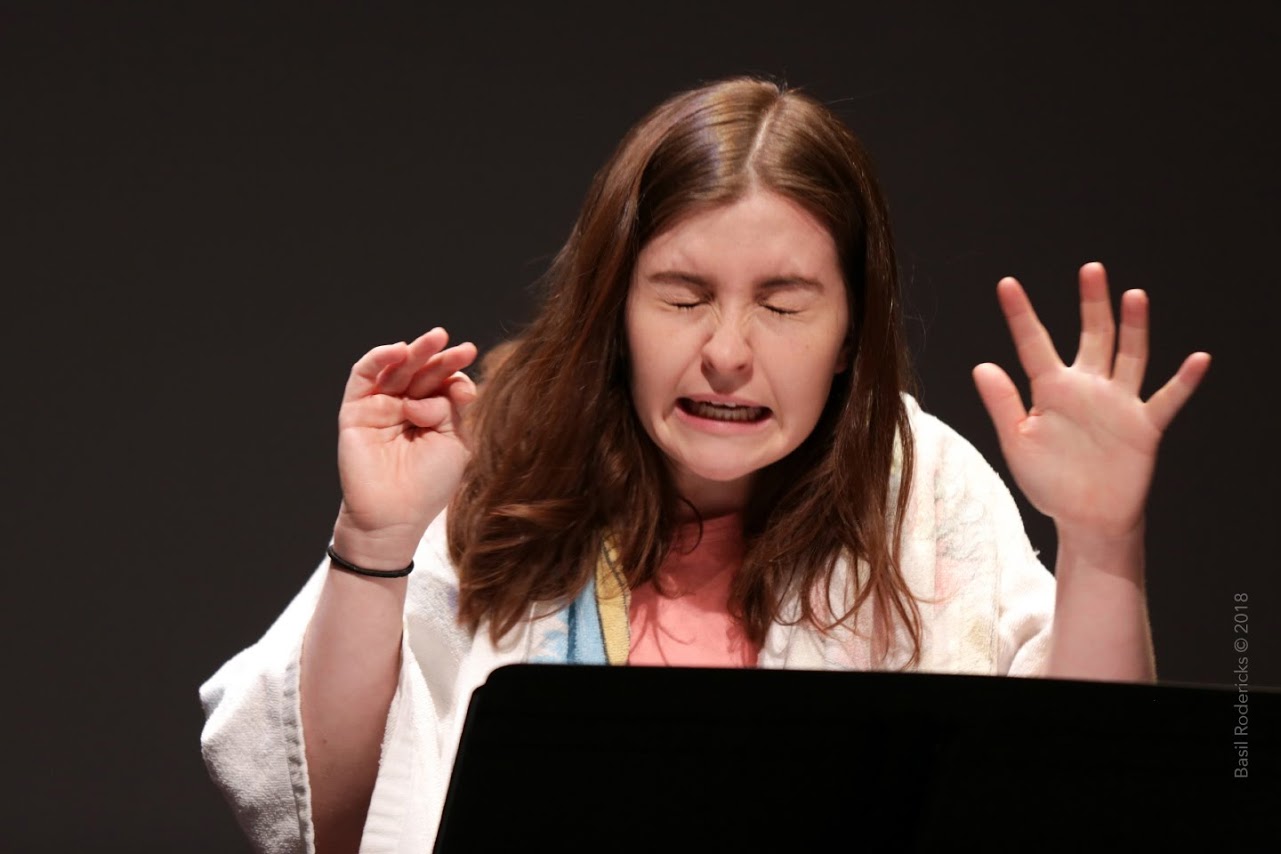 It’s so exciting to see what different artists do with the same prompt. This year’s prompt is WAR & PEACE. Who’s going to protect us in an existential war about construction in the Holocaust? Superheroes, that’s who. And they’ll be drinking coffee. 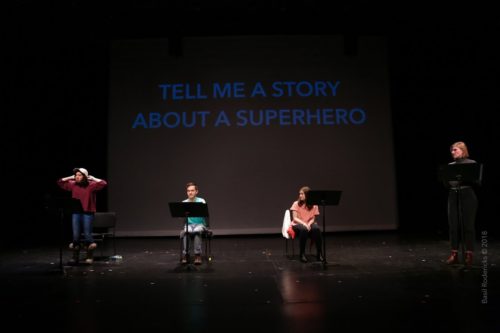 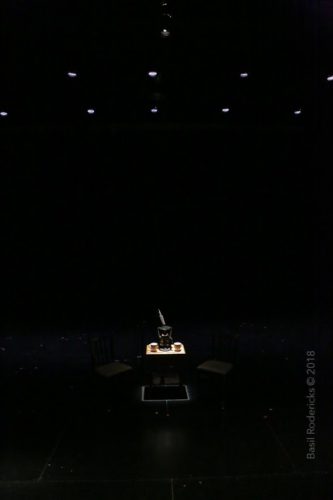