On Thursday, March 22nd, LABALive One will present an evening of subversive art and teachings on this year’s theme, WAR & PEACE. The evening will feature LABA teacher Liel Leibovitz and works-in-progress by LABA Fellows Jess Honovich, Brandon Woolf and Tal Beery.

In his performance, visual artist Beery will respond to the only remaining item left of his estranged grandmother: her dubious 1949 account of surviving the Holocaust. Here Beery explains his ill-fated search for the real story.

I like telling people that my grandmother Chaia was psychotic, that she was a prostitute, that she worked for the Mossad, that she lived in a shack on a dusty rooftop in Tel Aviv, that she owned an apartment in a seaside village in Italy, that she smoked and cursed, that she could pop up anywhere in the world at any time, that she hid my mother in the closet of a Christian monastery for the first four years of her life, that she was a bag lady who walked the Tel Aviv streets day and night with other crazies and weirdos, that she wouldn’t hesitate to throw knives at you if you crossed her.

I would tell people that she did all those things because the Holocaust destroyed her, that it destroyed her family, that she was pushed out of a unimaginably overcrowded train car through a tiny window then shot by German soldiers as soon as she hit the ground and left to bleed and rot in the middle of the Polish forest, only to wake up and find her way back to her village where she hid in her own attic while German soldiers lived below, nursing her own wounds and stealing pig food late at night when no one was watching. There she stayed more than two years, alone, like a mouse, from the ages of twelve to fourteen. And one day in the summer she had the nerve to go out from her hiding spot and wander into a village, where she convinced a farmer and his wife to let her stay with them in exchange for work. They let her sleep in their barn and each night, the farmer raped her. Then, a year or so later, a strapping young Jewish partisan, himself an escapee of the death camp Treblinka, came through the village to announce that the Germans had lost and that he was bringing all the local Jews to Palestine. Safta Chaia joined him, and five years later, he became my grandfather.

That’s the story I told people for more than thirty years, but it’s not the truth. None of it. Okay, maybe parts of it? I don’t know.

One day, when I was twenty-one and living in Israel for a few months, I decided to do the unthinkable: spend the day with Safta Chaia and then sleep that night on her couch. At this point, she and my family were not speaking. I was Safta’s only contact to my mother and her other grandchildren, and I felt a strange responsibility to her. She always liked me best and said I reminded her of her brother. I told my parents the plan, and they tried to warn me. But I was stubborn, and I wanted to know her story.

It was a scary and difficult day, maybe the strangest day of my life. Safta Chaia told me her story at least three times. Each time it was different and never did she follow a linear storyline. She jumped forward and back through decades, freely associating memories that seemed to have no clear connections. But slowly, in a way that had never happened to me before or since, I entered her mind, which was a completely broken world. She ended our conversations that night explaining to me that my grandfather raped her, and that my grandfather molested my mother, and my grandfather molested my dad, and my dad molested my brother. The truth is, that by the time she was telling me all that, I honestly couldn’t say she was lying.

I woke the next morning at 6am. Safta Chaia was sitting above me, eating dusty dates inches from my face, dentures sloshing in her mouth, asking me vaguely accusatory questions (“why did you want to know all of that?”) and making veiled threats. I made my excuses and left immediately.

It took me awhile to disconnect from her mind and come back into a world where people and reality could be trusted. And once I did that, I knew that I could never maintain a consistent relationship with her. Now I, too, cut her off completely.

Then one day a brown package arrived for me containing hundreds of pages of photocopied handwritten text in Polish. It was from Safta. I had forgotten that on that terrible day, I had convinced her to mail me a photocopy of her war memoir that she had written in 1949. I told her it was a treasure and promised I would get it translated. But I looked through the pages, put it back in its envelope, put the envelope in a drawer, and forgot about it. I couldn’t deal with it then. Safta was still too real, and she was a threat.

The next year another strange thing happened. We found out Safta Chaia was dead, perhaps a month or so after she had sent me the package. But she had died the year before. We were her only family, and it took all that time for government workers to find my mother’s phone number in America. Stranger still: six months after she died, the neighbor who hated Safta, the one who took her to court and failed, time and again, to have her evicted, arranged for men to come dispose of her things. So by the time we found out that she was dead, everything of hers was gone— every letter, every picture, every memory — except for my photocopy of the handwritten memoir. The guilt and regret I felt was hard to bear.

Finally, a few years later, I had the opportunity to take that text she wrote out of its envelope, have it translated, and read it. It was two hundred pages of handwritten Polish verse, and I began reading it cautiously. The story was so troubling, I could barely keep my eyes dry — I would read a line then stare into space for twenty minutes. It took me weeks to read it. I was finally connecting with what actually happened to her. Somehow this felt redemptive. My shame was evaporating, and Safta was smiling from Jewish heaven.

We were all together
together in the train car
we were riding
we were not even holding hands because they did not let us stand together
because they packed about three hundred people into one car.
I do not even know if
I saw Mother or I saw
my older sister who stood
by me when I jumped.
I had told them nothing
I just stood on the car
and I jumped.
I have never again seen
anyone anymore
just blood
blood and blood and blood
I lay in blood
neither heaven nor earth I saw
and when I got up
I did not think
but took off to somewhere
and then when I wanted
to look for something
I did not find anything
just the braids
I was plugging the blood with the braids I tied up my head with the braids
and when I looked at the braids
against my will I got some kind of strength and even some consolation.

It was so moving and real. But as I read on, I realized that again I had been fooled. Maybe parts of the text, like the above, were true, but I couldn’t tell which. Maybe all of it was true, but if so, it was horribly incomplete, so much so that it accounted for less than a month of her life during the war. In fact, all two hundred pages take place over the course of five days, and more than one hundred and fifty of those pages is dialogue between Safta Chaia and her Polish friend, Mary, who apparently saved her life but whom Safta had never once mentioned to anyone after the war.

Now I’m stuck with not knowing. I’m back, somehow, to square one. The text and her life remain a mystery to me. There will be no truth to redeem her, or me. 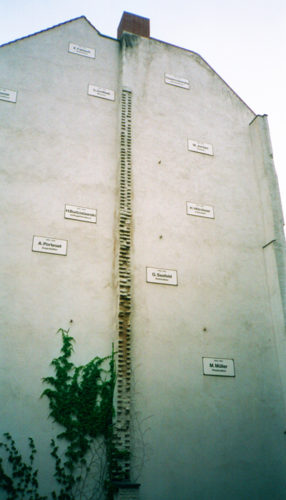