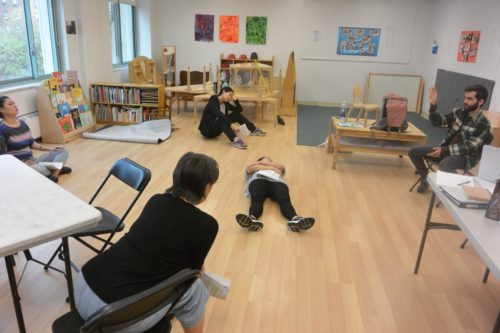 On Thursday, May 11th, LABAlive Three will present an evening of art works and subversive teachings exploring our annual theme, OTHER. The evening will feature teachings by LABA Scholar Ruby Namdar and works by fellows Laura Beatrix Newmark,  Elana Greenfield, and Michael Leibenluft who will present his theater work in progress, Salesman之死.

Here, Leibenluft talks about his project, about crossing boundaries and languages and the fluidity of the idea of America.

Salesman之死 is a theatrical response to Arthur Miller and Ying Ruocheng’s production of Death of a Salesman at the Beijing People’s Art Theater in 1983. Miller spent six weeks in China directing the production, and Ying played Willy Loman and translated the text. The production was a critical success and one of the first major international collaborations following the Cultural Revolution. As a director working regularly in both China and the U.S., I wanted to bring together a like-minded group of bilingual theater artists based in New York and have a conversation about the cultural and linguistic translation that goes into our work.

How did you make the piece?

Several years ago I read Arthur Miller’s account of his work in China entitled Salesman in Beijing and more recently I read Ying Ruocheng’s biography co-authored with Claire Conceison entitled Voices Carry. The questions and struggles both Miller and Ying depicted throughout that process resonated deeply with me and reminded me of many of my own experiences working in China. For example: as a director or leader of an artistic process, is there a way to share your experiences and process in a new environment without imposing it upon others? How do we uncover a sense of shared “truth” or “reality” in a group with widely varying experiences? And ultimately, when we’re creating a story set in America with American characters, what assumptions and impulses are we relying on as we construct “America” on stage?

But there was also a lot from what Miller and Ying described that seemed unique to their historical moment, a moment not long after the Cultural Revolution when America and China were finding how to reconnect culturally. And today the relationship between China and the U.S. feels much more interconnected on multiple levels. So I wanted to revisit a moment of cultural intersection (both in process and product) but with more of a contemporary lens. 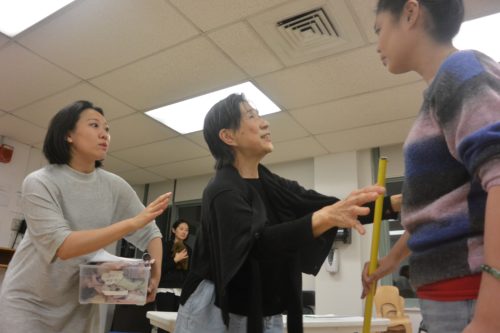 After deeply considering the 1983 collaboration, we used it as a springboard but decided to set our piece in more of an abstracted rehearsal room in today’s world. We cast an all female cast of four performers to reframe the main players, both on and off the stage. Salesman is such a butch text about fatherhood and American masculinity, and Ying Ruocheng and Arthur Miller are these patriarchs of Chinese and American modern theater respectively. So we thought removing the men from the picture (at least on stage!) may allow us to open up the idea of “playing the other” on multiple levels.

How is the work related to Jewish culture?

One of the ideas that is embedded in this piece is the murky territory between Jewishness and whiteness. Arthur Miller was ethnically Jewish, and there is some debate as to whether or not the Loman family was modeled after a South Brooklyn Jewish family. But I think that Miller wanted to universalize the characters of the play, which meant presenting them as “white” rather than “ethnic” or Jewish. And I find this tension between the universal and the specific fascinating. I think we take it for granted, but I think often in American culture we label white stories as more “universal” or “American” at the expense of excluding minorities, women, and people of color from that picture. So I think many artists like Miller drew from their experiences, which were in some senses Jewish, but along with increasing assimilation and privilege among the Jewish community, they offered these experiences as “white” so they could be represent American, rather than be Jewish or ethnic.

So are the characters in your piece “American”? Or where does American identity end up in your work?

Oh god, I don’t know. On a personal level, I am deeply American. I was born and raised in the U.S. and spend a majority of my time there. But the more I work across languages and borders, the more I have come to understand the fluidity of culture and identity. Most of our ensemble and design team in this room was born outside of the U.S., and our team represents a broad spectrum of Chinese and Chinese American identity. We have artists from China, Taiwan, Singapore, and Hong Kong who’ve been living in the U.S. a range from two years to forty. Everyone in our group is American in certain ways, and we all have different investments in living here and making work about this country. But the idea of America is not a nationally, linguistically, or culturally bound thing. It spreads out through our television and film and our military and politicians. And the more time we spend living in this place, the more those ideas follow us wherever we go. 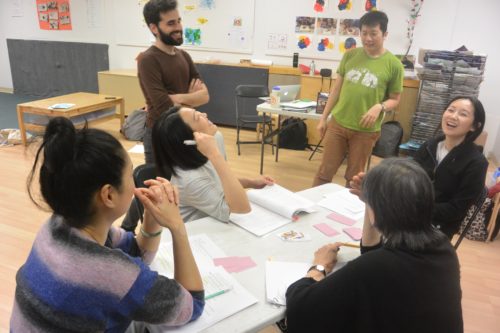