On Thursday, March 16th, LABAlive Two: Others will present an evening of art works and subversive teachings exploring our annual theme, OTHER. The evening will feature teachings by LABA Scholar Ruby Namdar and works by fellows Hadar Ahuvia, Abigail Katz, and Gordon Haber, who will present his work-in-progress, a story collection titled Uggs for Gaza.

Here, Haber introduces his work and offers a glimpse into his writing on the volatile relations of war, race and identity.

For LABAlive Two: Others I am working on a story about drinking, fighting and f**king.

Last year I became interested in the Korean War. It started as an idle question — “here’s something I should read about in my spare time, I don’t know anything about it” — and blossomed into an obsession, or the kind of obsession that in my case leads to fiction. 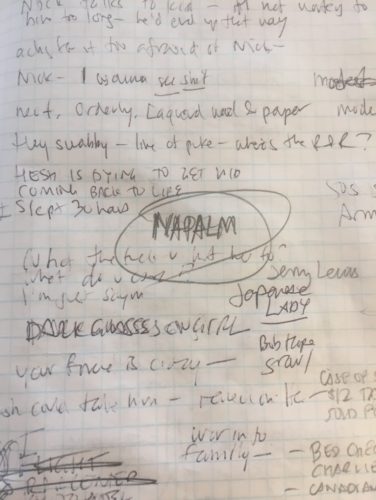 When we talk about human otherness in conflict, the Korean War is a perfect example. From the American perspective, the Korean War was when the US Army was integrated. You had black men and white men fighting alongside each other, sharing the intimacy and terror of combat. And this was when Americans Jews and Italians weren’t quite considered “white.” I read heartbreaking accounts of Italian-Americans being treated like shit, insulted by their superiors and singled out for dangerous assignments.

In the 2000s, by the way, Congress investigated the denial of medals to Jews, Latinos and African-American soldiers. These guys would perform some insanely heroic act, get recommended for a medal, and then some racist officer wouldn’t pursue it. In 2002, Obama gave the Medal of Honor to twenty-four such veterans, many from the Korean War, most of whom had already died of old age.

As for the Korean War itself, you have Americans fighting with South Koreans, and fighting against North Koreans and Chinese, as well as all the other allied nations involved, the UK, Canada, Turkey, France, Ethiopia, Greece, Japan under American occupation. So many cultures were dumped together and most of them were armed. 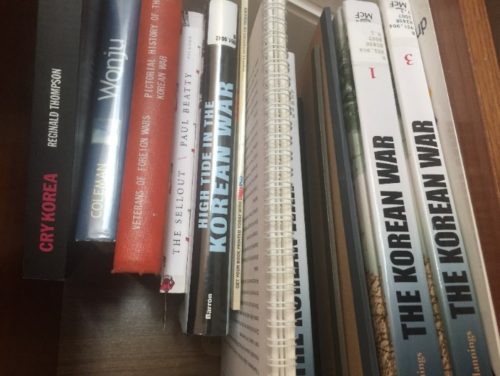 So I’ve been working with this character, Herschel Marx (no relation to Groucho or Karl). He’s a young Jewish draftee from Brooklyn thrown into this global conflict. I’ve been working on short stories about him in Korea, and the one that LABA has been particularly helpful with is called “R&R”, which is about young Herschel on leave in Japan.

It’s fascinating to note that the texts we are reading In LABA are one hundred percent comfortable with what we now call “othering.” There’s the underlying assumption that everybody knows that men and women are different, Jews and gentiles are different etc. In a strange way, this is kind of liberating.

When you read historical fiction — which is as good a definition as any for my work-in-progress — you often see writers afraid to grapple with prejudice, and that often strikes me as false. I think it’s my job as a writer to reflect their actual attitudes rather than impose my own attitudes about race and otherness on the past. Not every protagonist needs to be another Atticus Finch. So in the end I’m depicting a lot of things that make me uncomfortable — racism, prostitution, violence, exploitation. But to ignore this stuff or pretend it didn’t happen would be avoiding the truth, which is kind of deadly for fiction.

The piece I read for DRUNK in January, “Yak Juice” (following below), was my attempt to figure out my characters, how they think, how they talk.

For LABAlive 2 I’m working up another story to read to the audience. I’ve been putting together a story collection, and I realized that while we are looking at Jewish texts about otherness in LABA, every story in my collection deals with themes of otherness — Jews and gentiles, blacks and whites, men and women, Americans and Europeans. So I’m using these stories about Herschel to round out my collection, which, incidentally, we’ll be giving away copies of at the event. I love the idea of sending people home with a gift. 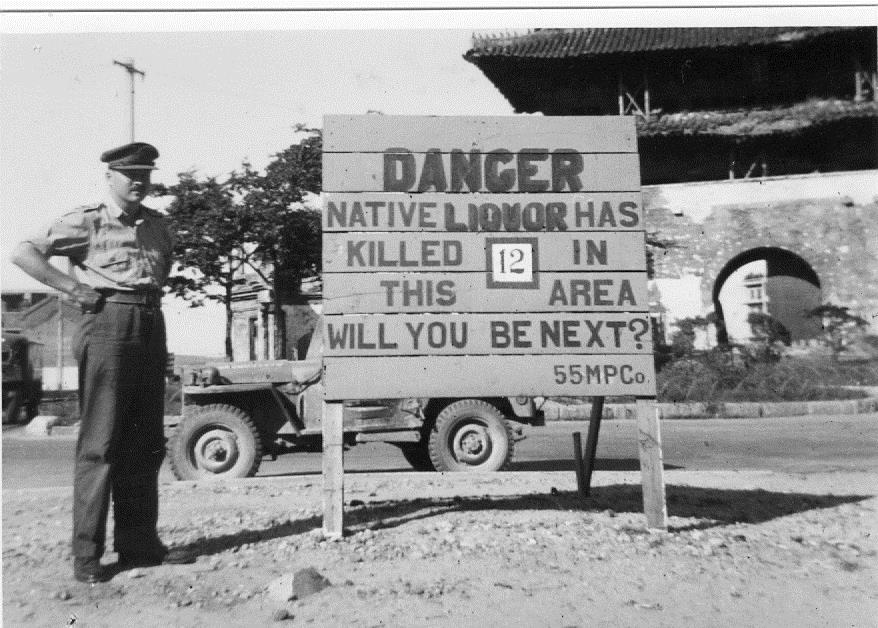 Corporal Herschel Marx, Hesh to his friends, was nearsighted and built like a fireplug. Today Hesh was on point because he was the only one good with maps. Their orders were to secure the radio station, which was stupid because all the enemy shovel-heads were either POWs or dead. Half the buildings were rubble, the other half had every last window blown out. The weather was shitty with a one hundred percent chance of rain.

Behind Hesh was Sergeant Anderson, a big blond World War II vet who looked like the picture you’d see in the dictionary next to the word goy. Third in line was PFC Nick Frango, a Brooklyn guy like Hesh, but Italian, which was sort of like being a Jew but with better wine. Then PFC Bailey, a schwartzer from Memphis, and finally the new kid, Metzger, whom Hesh had dubbed “Wetsger” because he pissed himself under fire.

“The Koreans are Mongols, you see,” Frango was saying to Metzger. He nodded toward two filthy children picking through trash. “Look at those kids. See the faces are flat and the heads are sloped. That’s why we call them slopes.”

Hesh’s eyes moved left and right. The rain trickled in through a tear in his poncho and his glasses kept fogging up. He had been scared when he got his draft notice but also kind of delighted. It was a way out of Brooklyn. Forty-eight hours after setting foot in Korea, he realized the enormity of what he faced when some poor schmuck walked up a rise and a sniper shot him dead. The top of the guy’s skull had sheared off, exposing his brains. Hesh’s waking state was now a combination of exhaustion and anxiety. He hadn’t showered or had a slept more than three consecutive hours since August. He was twenty years old.

Bailey said, “Hey Frango, so why do they call it poontang?”

Frango said, “What am I a fucking entymologist?” He turned back to Metzger. “Now, the Chinese, you see, they’re different.”

Bailey had transferred in when they took apart that all-black regiment. The men had been wary of him because he griped about this being a white man’s war. Then outside of Wonsan he saved two wounded men, carrying them to safety, one under each arm.

The rain was pissing down and still the air had that Korea smell of charcoal, pickled cabbage and human shit, with a sharp overlay of exploded ordinance. Utility wires snaked in the streets or hung from the poles. Then the death smell came up strong as they turned a corner and there was stack of dead North Korean soldiers, their quilted dun uniforms caked with dried blood. “Oh Jesus God,” Metzger said.

Hesh had halted before a pile of rubble with a twisted lattice of metal lain across the top. He double-checked the map.

“Sarge,” he said, “I think the radio station is secure.”

“I gathered that, Marx.”

Sergeant Anderson was in his I’m thinking pose, hands on hips, poncho dripping, head cocked like Lassie hearing a distant cry for help. Down the street, past a row of Western-style buildings, was an old house, its thatched roof intact. Anderson made sure it was clear, moving through the two rooms with his weapon up, before letting the others come out of the rain for chow.

Hesh pulled off his poncho and changed his socks. He was aware of a personal stink beyond anything he thought humanly possible. He took a can from his pack — Christ, ham chunks. The only thing worse than trayfe was trayfe that tasted like ass. Meanwhile Anderson was stamping at the floorboards. One gave way with a snap and he lifted out an earthenware jug. He pulled the cork, held it to his nose and smiled.

“Fuck you, Hesh. Gimme that bottle.”

Yakju was a kind of rice wine, which made it sound mild, like something you’d have with chop suey. It was in fact vile Korean homebrew that tasted like sour herbs in rubbing alcohol. It was against regulations after some guy in the 2nd Infantry went blind. But it was booze, which was pretty much the only thing that calmed Hesh these days, and it had been weeks since he had anything stronger than beer.

Passing the jug, Hesh felt Bailey’s eyes on him.

“I didn’t know you were a Jew,” Bailey said.

Bailey said, “So what the fuck you doing in Korea?”

“I was drafted,” Hesh said.

“Come on. Your people don’t do shit unless there’s a dollar in it.”

Hesh wanted to hit the son of a bitch but didn’t. One day he might need Bailey to drag him to safety.

Outside the rain had thickened. If they left now they’d be up to their calves in mud. But here it was dry and they were getting soused. Frango whistled Goodnight Irene as he hunted for coal. Anderson was cleaning his carbine and after three turns at the jug Metzger was asleep, a line of saliva at the corner of his mouth.

Yesterday during a mortar attack Hesh had screamed for a corpsman while trying to help a guy keep his intestines from spilling out. The idea of that happening to one of these guys, to Anderson or Frango — even to Bailey, the dumbass — it was unthinkable. The jug came back to Hesh and he drank, not wanting to consider that, or the equally unthinkable possibility of letting any of his friends down.