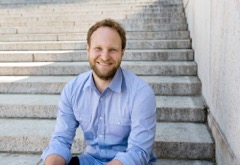 “THE NEXT FOUR YEARS” by Joshua Max Feldman

Joshua Max Feldman, a New York-based author, is a 2015-2016 LABA alumnus. His new novel, If I Knew the Way, will be available in fall, 2017, from William Morrow. His novel The Book of Jonah is currently available in paperback.

Here, on the eve of the 58th Presidential Inauguration, Feldman explores our relationship to the other within the current political context, and reflects on what we should expect, as well as what we should do, in the next four years.

*Disclaimer: The views and opinions xpressed in this article are those of the author and do not necessarily reflect that of The 14th Street Y.

And the city was broken up, and all the men of war fled by night
2 Kings 25:4

In the last hours of November 8th, 2016, a terrible shock was delivered to America, like a rock thrown through stained glass, shattering expectations, precedents, assumptions, faiths. Some despaired at the change; others exulted. Neither despair nor exultation seems out of proportion to me, as we consider the blasted shards and try to make sense of it all. What remains intact? What can be estored, and what maybe shouldn’t be? And what new things have been volcanized into being?

We live in confused times, disorienting times, disordered times, and extremes of emotion are merely a sign that we’re paying attention.

I spent Election Day, 2016, canvassing in Pennsylvania. It was a gorgeous day, perfect autumn weather, bright fallen leaves in the grass, a clear blue sky. My wife and I brought our eighteen-month-old daughter along with us: We wanted her to be part of history. I knocked on some doors, talked to some folks, encouraged them to vote, but I didn’t bring much urgency to the task. Democracy that afternoon didn’t seem in much need of defending.

I’d driven up that morning from Brooklyn, started the day with some perfunctory training at the home of an ardent local volunteer: a big, lovely house on a street with spacious manicured lawns, porches, oak trees. I was given a list of addresses of local Democrats to coax into voting, homes in a different neighborhood: close-set duplexes, chipped siding, rusted door handles. But we were all Democrats, after all, and any differences among us—race, gender, class, whatever—were surely elided into the shared project, the shared vision of America. And what greater realization of that vision could there be than just these encounters on doorsteps, conversations between total strangers, about where and how to vote?

In retrospect, the complacency of it all is breathtaking.

In retrospect, too, something else seems evident about that afternoon: a charge in the air amidst the beautiful weather, a kind of trembling in the sidewalks, the lawns, the doorposts. A faint whine just at the top of our audible frequency; the shudder of an image reflected in water; some hint of tenuousness, of fragility, of danger. But omens can only be understood in hindsight.

And the creeping things…
Genesis 7:23

November 9th, I was back home in New York, the city hushed and stunned. People shuffled as much as walked; the simplest acts of daily life—buying coffee, swiping a MetroCard, sharing an elevator—were done with a certain itchy discomfort. We became a city of people who didn’t know what to do with their hands.

After all, New York prides itself on being the exemplar of a certain category of American values: a pluralistic city, forward-facing, tolerant: an open door. Trumpism, on the other hand, is a rejection of precisely these values, with its insistence on the threat of outsiders, its glorification of the past, its harassment of difference, its hysteria for walls. And New York didn’t turn out to represent its ideals quite so fully, either: By the weekend, a playground blocks from my apartment had been defaced with swastikas. This was hardly the only act of bigotry in the city, or anything like the most severe.

The strangeness of recent weeks will someday be as difficult to convey as the time before the election. Trumpism has yet to take formal control of the reins of power, but its creeping progress has already begun to spread, like rot, into the government, into public life. Never have cabinet appointments been so menacing, both to the public and to the agencies these appointees will lead. The free press is marginalized and degraded. Kleptocracy takes hold not only undisguised, but as the emerging administration’s first order of business. And where leadership is needed, we are instead daily reminded of the smallness and moral confusion of our leaders.

And yet, the clock hasn’t even started. The anticipation of worse and the Pollyanna contention that everything is okay (that is, that all is normal) vie like two fevers in the same head.

There has to be a virtue to the loss of complacency, to the shattering of illusions. The worst we could do would be to fit a new set of complacencies to the times, establish a new tolerance for new perversions. Equally, though, we can’t expect a quick appearance of book burnings, Midwestern Kristallnacht, cattle cars. A failure of the imagination helped usher Trumpism into power; and such doomsday expectations are a failure of the imagination, too, an ability to conjure up only what we’ve seen in movies. Trumpism will have its own particular outrages, its own lumbering pace, as it pushes on every institution that might oppose it, testing for weakness. There’s little doubt that immigrants and Muslims will suffer first and suffer most; the federal government and the social safety net will be stripped and sold for parts; opponents will be harassed and threatened. A dispassionate analysis of what’s to come provides ample cause for alarm.

And what doth the Lord require?
Micah 6:8

I’ve spent a lot of time since November 8th thinking about what it means to me to be Jewish. These reflections stem only in part from my concerns about what Jews might face over the coming years. I’ve been asking myself what I believe Judaism represents, and what my faith requires of me.

I don’t go to synagogue very often; my adherence to kosher laws is, let’s say, imperfect. But I’ve always believed that at the core of every Jewish observance—every law, every rite—is a commitment to making this world better, and to defending what is good in it. The Jewish tradition of advocacy for justice stretches from Abraham arguing with God in Genesis over the fate of Sodom to Abraham Joshua Heschel marching with Martin Luther King, Jr. And it’s a tradition that is deepened by all the injustice Jews have faced across the centuries, the long tally of pharaohs, kings, dictators who have persecuted us. Judaism, I have long believed, constitutes a moral obligation.

So: What should we do?

It’s the question of our time, the question of so many confused and shaken and angry people. It’s the shock at the events of the last weeks becoming a call to action—an anthem: What should we do?

For now, much of the work will be mundane, undramatic: calling elected officials every day; donating to the ACLU and other organizations on the front lines; subscribing to newspapers; participating in public protests; joining or forming local organizations that advocate for the most vulnerable; educating ourselves about how authoritarianism operates. This work may not meet our craving for bold, decisive action; and at worst, the lack of instant results could compound feelings of powerlessness. But slow, quiet, determined effort is often the most intelligent. And individuals acting from conscience is nothing less than the foundation of a healthy democracy. The battle will be long; in many ways, it’s the same battle that has been going on for years, decades, centuries. But now we’re all awake to the stakes, we need to get started fighting. We can’t ever restore what was, but we must be responsible for what happens next.