Ascending the Tower of Babel

A Word From the Divine

Ruby Namdar and Hanan Elstein for the LABA Journal 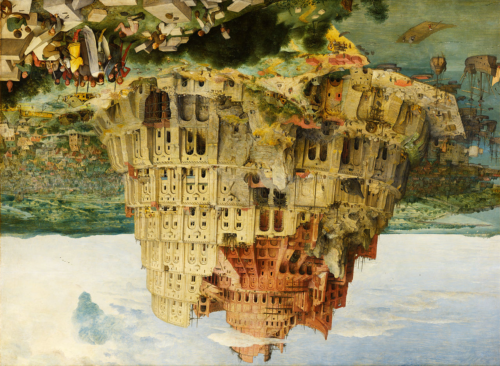 A few weeks past LABA’s session on the Tower of Babel (Genesis 11:1-9), LABA Scholar Ruby Namdar and LABA Journal Editor Hanan Elstein, both still in awe of this remarkably condensed yet multilayered biblical short story, sat down over some fine bourbon to reflect on it once again. Studying in Hevruta, a learning companion of two, they dove into its core, but alas, haven’t touched but a few aspects of this timeless sacred text, while unequivocally resolving the great mystery of its authorship.

Hanan: There are numerous traditional and modern interpretations of this story, none of which is undisputedly acceptable or fully dismissible. What is it for you?

Ruby: I view the mythical generation of the Tower of Babel as contemporary culture heroes, as an existentialist success story. Their story is an archetype of our present-day mindset. I want to take a minute and talk about the difference between pre-modern vs. modern tragedy. The pre-modern tragedy is a drama of action: the hero fights against fate, inevitably loses the fight but leaves a mark in history. Modern Tragedy is a drama of inaction, of hesitation and doubt that paralyze the anti-hero. The generation of the tower, echoing the oedipal model, are the polar opposite of the modern tragic heroes such as Hamlet and Willy Loman, the protagonist of Arthur Miller’s modern classic play Death of a Salesman. Their story, historically read as a tragedy, encapsulates our generation’s heroic ethos: Like us, the people of the tower wished to coronate themselves as gods, to become players rather than pawns in the game of creation, to recreate the world in their own image and on their own terms. We did not grow up on the model of succumbing to fate, we grew up on the model of wrestling with it – like Jacob wrestling with the angel, with god really, on the bank of the river Jabbok. The text does not describe them as sinners, the dynamic of sin and punishment is our own projection. Ironically, the motivation the bible states for the building of the tower is not an overtly rebellious one. They want to create a geographic and a symbolic center for the world, lest they scatter. To grant the world a three-dimensional structure, not a two-dimensional one. They wanted to see the world from above, through and from a godly perspective, that of the grand architect. This is modernity in its purest embodiment.

Hanan: On this same line, it is interesting to observe how, according to the story, the people of the tower built it. They did not work. They did not invest labor in its construction. They did not do anything with their bare hands, but rather with their mouths. They simply said one to another: “Go to, let us make brick, and burn them thoroughly”, and then, so it says in verse 3, “they had brick for stone and slime had they for mortar”. It is as if by the sheer audible utterance of the word the raw materials were transformed and metamorphosed, as if the people possessed magical, miraculous – maybe godly – powers over the forces and laws of nature. No wonder god destroyed their unified communal endeavor not by disrupting their mutual understanding, but by preventing them from hearing each other (verse 7), by obstructing their communication.

Ruby: This may have been much less dramatic an intervention than we usually imagine it to be, god may have deprived them of the smallest element, one which differentiates between the divine language and the human language. He may have revoked only a fragment of their perfect language, a language which consists of a total synergy and a semantic unity, a language devoid of the Saussurean signifier-signified linguistic divide. With that subtle tweak god reduced this language from a tool of creation to a mere tool of description. The story does not tell us how the construction of the tower seized, whether it was rapid and immediate or an ongoing process which lasted over many generations. It might have occurred slowly and gradually. Our very own culture may still be a part of this slow disintegration and dispersement.

Hanan: They must have realized that their goal of making themselves a name (verse 4) cannot be achieved. What do you make of this crucial and fairly vague definition of their objective?

Ruby: “Let us make us a name” – The Hebrew word for name, Shem, has a double meaning, it could mean a name, or a memorial monument. There is the abstract element and there is the physical, architectural element to this term. The people of the tower allegedly failed to achieve their central goal. They wanted to breach the natural order of time, but then god intervened and denied it from them. However, they did make themselves a name. They are our reference. Look at us, here we are, indulgently sipping exquisite bourbon in the great city of New York, five thousand years after the fall of the tower of Babel, and we are still talking about them. They made their mark! Their motivation is very familiar to us, it resonates with our own motivations and sensibilities. For me this is yet another expression of the immense inspirational effect of Scripture.

Hanan: This bags then the questions: What was god afraid of? Why did he fear them?

Ruby: He was afraid of losing control. Only had he been fully confident of himself, could he let them be and go on with their business. He needed to be in control of creation. Every artist and creative person knows and struggles with this fear.

Hanan: I cannot but think that the geographical and territorial safety they wished for themselves meant also a restraint of god’s all mighty power, a potential limitation forced upon him. Only a few prior chapters he had created the whole world, a vast, actually an endless universe, and now the people came and settled in a specific and designated area, a limited earthly realm definable and graspable by the power of sight from above. God’s enormous creation of endless multiplicity shrank all of a sudden to a unified region substantially smaller than New Jersey.

I want to turn now to a question that has been bothering me for years. I have never read anything even remotely close to this text. Its structure, every sentence, every word, for a matter of fact every letter, every gap, they are all a compelling demonstration of utmost beauty and genius. I wonder who could have written it.

Ruby: I am sorry, but this text could not have been generated by a mortal mind. I want to be very clear about it: I am claiming this in a typical Jewish ironic manner. This is a purely poetic statement. It is not my intention to raise it neither as a scientifically proven statement nor as a theological declaration along the lines of creationism. This text was written from an Archimedean point, positioned outside of the human mind.

Hanan: That makes the two of us. Why did god write it, then? I mean, his portrayal in the story is not very positive. He is seen as weak, at least to some extent, and could easily be considered also as unjust.

Ruby: It is a manifestation of radical intellectual integrity. Full disclosure is typical in the Bible as well as the Talmud. In all twenty four books of the Bible you cannot trace even a single shred of kitsch, dishonesty and beautification of reality.

Hanan: There is so much more to be said about this glorious text. We can go on and on like that for many hours, but I’m afraid we should leave some of this fine alcohol to other guests in this cozy establishment. Maybe our LABA fellows will add their thoughts and respond to our little conversation. Could we conclude our discussion by agreeing that the Tower of Babel, compressed as it is, is timeless?

Ruby: Totally. That is exactly the reason for my disinterest in its demarcation into historical categories. If it was dependent on context, it would have been vanished like so many other texts. Its power stems from reading it and writing about it as a timeless text. The Biblical Criticism, the scholarly study and investigation of biblical writings, has made a relentless effort to limit the importance and meaning of the Bible. It originated in the Christian world, and it served an endeavor to undermine the Jewish world and the authority of the Bible. In its original form, Biblical Criticism was a greenhouse for rabid anti-Semites and anti-Semitism. Later on the Jews adopted its conceptions, although its whole purpose was to compromise the independent objectivity of the biblical text. It was a deep insecurity disguised as an honest cultural venture. We should not succumb to it, on the contrary. So, indeed, for me the Tower of Babel is timeless, and ahistorical.

Hanan: On this happy note, let us close the day. You will probably wobble slightly on your way back to your Manhattan house, surrounded by magnificent New York towers, and I will heavily sway my way to the somewhat more earthly Brooklyn. I believe we have just touched, if only for a fraction of a second, the top of heaven.