Ascending the Tower of Babel

On Towers and Monuments

Tirtzah Bassel and Hanan Elstein for the LABA Journal

During our last session we studied the Tower of Babel (Genesis 11:1-9) and then looked at four works of art that related in some way to the story. A few days later, Tirtzah and Hanan sat down over a cup of coffee to take a closer look at Brancusi’s Endless Column. 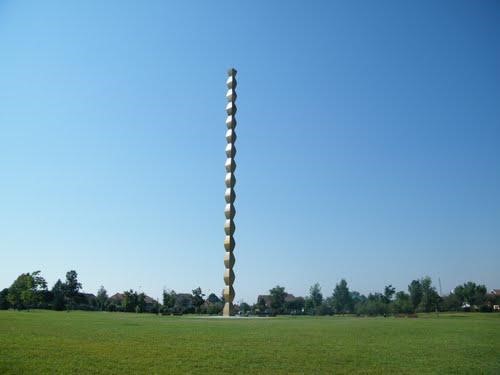 Tirtzah: When you look at the Brancusi what do you see?

Hanan: I come from a distance. I observe a long vertical white line cutting the sky and slicing the air. On a closer look I see it expanded and transformed from an abstraction to a three-dimensional object. I notice forms and shapes which create an imaginary line spiraling around them. I discern a pattern, even maybe a rhythm. I’m puzzled. All of the sudden this object has a decorative element and morphs into a spatial ornament. I ask myself what it is, what it is related to, why it is located in that pastoral countryside. It seems almost theatrical. I marvel at its sight and wonder: How was it erected there? How does it stand? How is it supported? What is the context within the space? Then you told us that it is a monument to fallen Romanian soldiers in the First World War. I instantly got confused.

Tirtzah: Why is this confusing?

Hanan: I do not understand what makes it a monument. It is unlike any memorial I have ever seen before. It places me in a wholly different cultural field. At first glance it seemed to me a totally abstract object. Suddenly it acquired specifications, it has a function in a specific national culture of collective memory and is related to a specific historical event. It has nothing typical of numerous memorials of the First World War. It seemed devoid of context. You can’t detect in it signs of heroism, national symbols, manifestations of distinctive local mourning. There are no epitaphs in large letters engraved on it. What is it then?

Tirtzah: How would you associate it with the Tower of Babel?

Hanan: Is this a tower at all? I mean, on the one hand, it seems to rise up. On the other, it lacks architectural elements we tend to pair with towers, such as a wide base and a structure which tapers up. We could easily imagine this object is a spear which fell from the sky. So, how would you link it to the Tower of Babel? Would you so say this column is a tower or a monument?

Tirtzah: It is kind of shocking to discover it is a monument, but at the same time I ask myself whether there is an inherent difference between a monument and a tower. When we look at examples of pre-historic structures we lack the original context and meaning in which they were created, sometimes we can only guess their function and the ways in which they created meaning.  So when we go and look at the Biblical story of the Tower of Babel we ask what was this tower – a functional building, a monument, a government office, maybe all of these? If we go back to the text to see why they built the tower in the first place it says: “ And they said: ‘Come, let us build us a city, and a tower, with its top in heaven, and let us make us a name; lest we be scattered abroad upon the face of the whole earth.’ (Genesis 11:4). So there is this idea that “making a name” is coming to counter the fear of being dispersed. That might be literally, a physical structure that brings people into one place, or it might be a tool for building a collective identity and meaning in the way that monuments and architecture are able to do.

Hanan: In what sense do you think that Brancusi’s monument is related to “making a name”?

Tirtzah: I am interested in Brancusi’s attempt to talk about the war in relation to eternity, as is indicated in the piece’s title. It feels very fresh and contemporary today, when we are more suspicious of nationalist projects of memory-buildings. I also find the element of repetition to be very interesting, this gravitation towards pattern and cycles in contrast to the utter chaos and destruction of war. Perhaps the Tower of Babel was built with a similar sentiment. There is something very touching, without falling into kitsch, in this attempt to use art to gather people and direct them upward.