The Forbidden Conversation and Those who Pay the Price 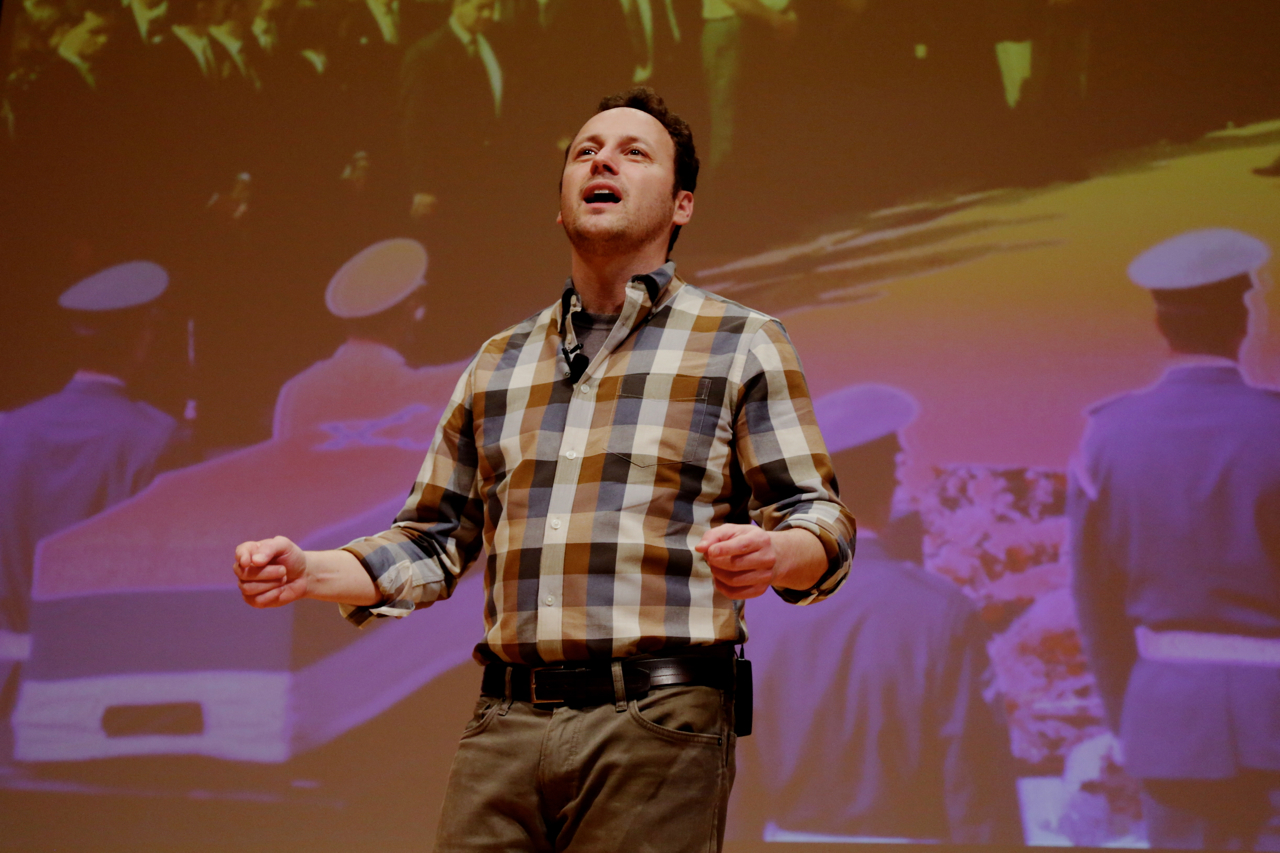 The Forbidden Conversation, written and performed by Gili Getz

A year ago, on Tikkun Leil Shavuot at the 14th Street Y, I performed The Forbidden Conversation for the first time. The play, which is about the difficulty of talking openly about Israel in the American Jewish community, was developed while I was an artist fellow at LABA.

When I’d visited Israel during the Gaza War in the summer of 2014, I had struggled for the first time in my life with my inability to talk to my father about the path Israel is on. Growing up in an Israeli political family that included family members from across the political spectrum, I was surprised, alarmed, and hurt when I found myself unable to talk to my father.

This difficulty came up again while studying the Talmud throughout the LABA fellowship. The theme we were exploring that year was TIME. I realized that we were approaching the 20th anniversary of Yitzhak Rabin’s assassination, the time I came of age politically. I looked to the future of the conversation as Jewish millennials start to redefine the rules of the Israel debate and demand (through groups like J Street U, IfNotNow, Open Hillel and JVP) that views that oppose the occupation and express solidarity with the Palestinians be reflected and respected in Jewish communal institutions.

While workshopping the play, I engaged in conversation with members of the Jewish community who had difficulty talking about Israel with their parents. 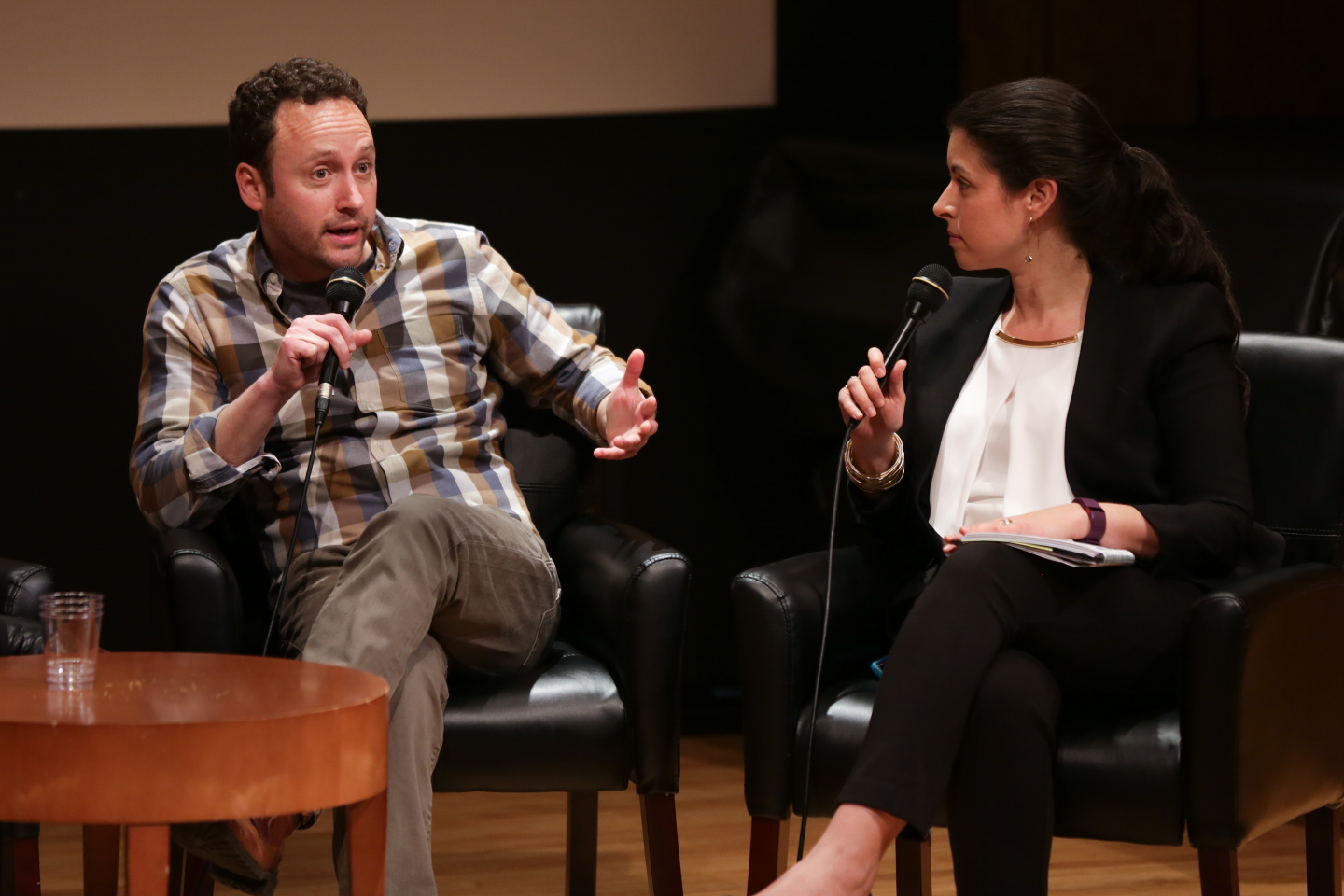 The Forbidden Conversation, written and preformed by Gili Getz

After the first performance, Rabbi Shira Koch Epstein, the 14th Street Y’s Executive Director, led an honest and open conversation with the attendees. I have been having these conversations in Jewish spaces ever since and asking of anyone I can: how can we improve our ability to discuss this core issue, whatever our political perspective might be?

It was important for me to know how this very personal work was experienced from different political perspectives. I wanted the work to be honest and open, but not to alienate any political point of view. I performed it in different Jewish spaces, including the Harvard Hillel, where the Open Hillel movement was sparked, which challenged the written and unwritten rules limiting the spectrum of “accepted” relationships to Israel. A radical act in our current culture. I performed for Orthodox students at Brooklyn College, as well as Rabbis and Jewish educators. I learned that the difficulty in having this conversation is experienced across the political spectrum.

In our current climate, communal consensus on Israel is even harder to recognize. Israel’s newly appointed Consul General in New York, Dani Dayan, rejects the two-state solution and supports the settlement movement, supported by organizations like ZOA. The fastest-growing Jewish organization on campuses, JVP, supports BDS (the Boycotts, Divestment and Sanctions Movement, which also rejects the two-state solution). Big changes reshaped the Pro-Israel advocacy landscape in Washington with the growing influence of J Street, of which I am a proud member, in the Democratic party and AIPAC’s hard Republican tilt. Sheldon Adelson has embraced Donald Trump. The growing polarization in American political culture and the alarming deterioration of Israeli democracy and rise in racism in Israeli society are all contributing to growing divide over Israel.

No argument, guideline or rule will prevent the growth of Jewish Voice for Peace. No false campaign to portray J Street as “Anti Israel” will change its growing appeal and influence in the Pro-Israel camp. No amount of Democratic speakers or touting of gay rights in Israel will slow down AIPAC’s eroding appeal among liberals and its reliance on a growing right-wing constituency. No Israeli start-up success story or tragic event elsewhere in the Middle East will hide the cruelty of occupation, and no criticism of Israel will diminish Jewish and Israeli anxiety over terror attacks, regional instability and the rise of anti-Semitism.

In the coming years we will all be struggling with fundamental questions on the future of Zionism, Jewish identity and our relationship with Israel. This forbidden conversation will happen whether communities decide to censor or avoid them, or not. Commitment to the Jewish community must include recognition of the diversity of opinions. It is not an easy process.

I have been engaged in American Jewish politics and been photographing American Jewish political activism for some time now. I am honored that some of my photos are published in the important new book by professor Dov Waxman, Trouble in the Tribe: The American Jewish Conflict Over Israel. The book examines the special place Israel inhabits in the Jewish American identity and the political spectrum of predominantly four political camps Jews in America are now divided into. I value engagement on Israel across the political spectrum, because I believe it is driven by a deep concern for the people of Israel and Palestine and a deep spiritual and cultural connection. Those who are active know this.

I’m personally driven to advocate for Israel because of a deep connection to the land and its people. It is a country I had the privilege to serve.

We would, rightly, like to think that our community overwhelmingly supports Israel, but so often we can’t talk about it openly because it makes us uncomfortable, angry, depressed or annoyed. There is a cost to our inability. Since creating this play, I have heard story after story of friendships being ruined, communities fracturing or communities prohibiting the Israel conversation all together. It is still unimaginable to me that an issue so important to the identity of American Jewry is the one that can’t be openly explored in so many places. Jewish students are being marginalized, demonized and excluded because of their political views. And the most painful for me are the relationships between parents and their children that are compromised over the tension or avoidance around this conversation. We must do better.

We need a communal space and culture where we are able to celebrate our ability to disagree, and inspire engagement within the wide spectrum of Jewish opinion. We should encourage spaces where community members are free to express their opinions without being vilified or marginalized. Our tradition is our inspiration, as open argument defines some of its very essence.

Gili Getz is an actor, photojournalist, and former LABA fellow. See The Forbidden Conversation at the JCC on June 11th at 10pm as part of JCC Manhattan’s Tikkun Leil Shavuot.