Ah, Love, Let Us Be True: A Meditation on Honi the Circle Maker. 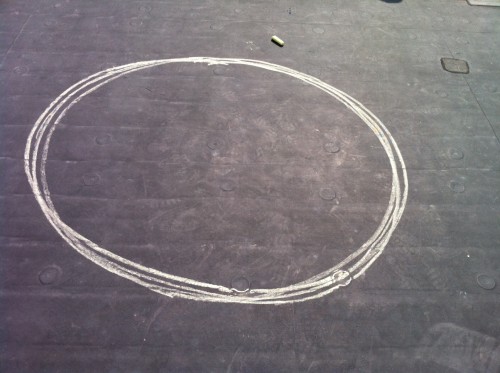 Honi the Circle Maker is a hero, Reb Sheriff, holster packed with magic chalk. But he doesn’t come across that way when you meet him in the two stories we read this year in LABA. Sure, he’s a miracle worker, but in the first story, he’s cast as an innocent, and in the second he’s a Mel Brooks alta cocker. I came to see, however, that we can look at what happens to the second figure, old Honi, in light of the first one’s lofty position as the circle maker, and then we get to honor Honi as a lonely hero, fighting injustice under the desert sun. And which modern figure does the chalk-slinging crusader most resemble? Truss me up and leave me under a date palm for seventy years if it ain’t “the poet.”

When his people, suffering from a drought, ask him to petition God, he does more than ask for rain. He takes a stand. With the arrogance of a young teenager, Honi draws a circle of chalk around himself and presents God with an ultimatum:

“Creator of the world! Your children have looked up to me as being peculiarly gifted by You; I swear, by your Great Name, that I will not move from this place until you have compassion on them.” The rain began to drop down [gently]. He said, “It was not for this that I petitioned, but for rain [sufficient to fill] wells, cisterns, and caves.” The rain then fell in violent torrents; when he said, “Not for such rains did I petition, but for mild, generous, and useful showers.” The rain then fell in the usual manner, until the Israelites of Jerusalem were obliged to go from the city to the Temple mountain, on account of the rain. They came and said to him, “Even as you prayed that the rains would come down, please pray now that they may cease.” (Study sheet on Mishnah Taanit 3:8, sefaria.org)

After the rain event, Rabbi Simeon ben Shetah tells Honi that were he anyone else, he would be excommunicated for that display of arrogance, but because he is like God’s pampered child, what can the rabbi do except shake his head over the mysterious ways of the Big Father, who’s raising a real prince? But, you ask, isn’t Honi sacrificing himself for the people, standing up to the Father who would orchestrate the suffering of his children. Yes, sort of, but like a spoiled child. The God of the Israelites, so stern with everyone else, gets silly with Honi, first making it rain too little, then making it rain too much. Ben Shetah’s comments seem to be right, Honi was taking a low-risk gamble because he’s got Daddy wrapped around his finger.

The second story gives us an agitated Honi, bothered by a sentence in one of the Songs of Ascent: “When the Lord restored the fortunes of Zion,/we were like those who dreamed.” Honi can’t understand the figure of speech but takes the dreaming literally, asking how anyone could dream for the seventy years of the Babylonian exile. This is extremely goofy! Why can’t he understand the simile “like those who dreamed”? The text makes it sound as if Honi was asking this question all over town, a stooped old man walking the streets, muttering to himself, “Seventy years? Asleep?!?”

Here he seems more like the village idiot than a wise man. God, then, comes across as a bully, turning the harmless old man into the Rip van Winkle of the ancient world:

One day he was journeying on the road and he saw a man planting a carob tree; he asked him, How long does it take [for this tree] to bear fruit? The man replied: Seventy years. He then further asked him: Are you certain that you will live another seventy years? The man replied: I found [ready grown] carob trees in the world; as my forefathers planted these for me so I too plant these for my children.  Honi sat down to have a meal and sleep overcame him. As he slept a rocky formation enclosed upon him which hid him from sight and he continued to sleep for seventy years. When he awoke he saw a man gathering the fruit of the carob tree and he asked him, Are you the man who planted the  tree? The man replied: I am his grandson. Thereupon he exclaimed: It is clear that I slept for seventy years. (Study sheet on Taanit 23:a, sefaria.org)

Still, it’s the circle maker we’re talking about, Honi the Circle Maker. He bears that ennobling nickname in the second story although not a circle is drawn. In that designation and in the plain ridiculousness of his not comprehending a figure of speech are the signs that all is not what it seems. What is so special about circle making, then, and what could really be going on behind or by way of his foolishness?

In the first story, Honi draws a kind of eruv, demarcating a holy, if small, region–holy in that it’s the locus of his standoff with the Lord. The chalk line redefines Honi. Outside of it are the muggles; inside, the circle announces, is one who will stare God down. “Circle Maker,” then, denotes the guy who decides when and where to take on the divine, and it connotes the special favor with which the Lord treats the circle maker. And in the second story it’s this very circle maker, beloved of God, the rain bringer, who is challenging that same God when, seeming like a dope, he questions the accuracy of the dreaming simile. If he isn’t just dim, then what does he mean by taking the figure of speech literally? I’m going to come at the answer by way of the chalk.

Crumbly chalk presents a paradox. It’s rock, but it’s soft. We can’t build with it, but the Cliffs of Dover and other such chalk massifs can support us and our edifices. It’s rock, but when we write with it, it disappears in our hands. It’s magic. Not only that, but it’s the material of signification — we make meaning with it. Wherever he goes, the circle maker, that master of the chalk, is the maker of meaning. In questioning the seventy-year sleep, Honi draws a circle around himself, albeit one of ideas rather than chalk, by arguing publicly with the word of God, with the psalm. And with these circles, he is challenging the notion that the exiled could ever return as if from a dream, which implies a return as if nothing had changed.

And Zeus Put Ganymede in the Sky

I think the story employs a strange narrative strategy. It presents Honi’s impossible misreading (ignoring the word “like”) in order to shift from the historical to the allegorical mode. God’s response reminds me of the way the Greek gods would transform favorite mortals into constellations. And just as the God of the Israelites cuts the man Honi free of his time, the author cuts the figure of Honi free of historical significance, making him a figure of allegory. The apparently literal-minded and literal sleeper becomes the figure of Zion or the exiled Israelites or any intensely nostalgic subject. Whatever symbol we make him, in the figure of Honi, the thing that seems to have endured throughout the separation is, after seventy years, very different, unrecognizable, misplaced.

But remember, he’s the circle maker, our sheriff. He arranged the showdown at the OK Grotto. (It may have taken years, but he kept at it.) This time he’s really the hero, this time he really has sacrificed himself for us. So it’s a cautionary tale, yes, but not about the risks of challenging God. Rather it’s an allegory of gather ye rosebuds while ye may, of carpe diem, of what’s really important for us humans, of mortality. If you’ve come this far with me, keep going, just a little farther, and you’ll see what I mean.

“Here Lies One Whose Name Was Writ in Chalk”

I like to see the circle maker as the poet. He makes signs that, he hopes, will connect him to the community as its savior, but of course those same signs enclose him, separate him from the ones he is trying to save, and dignify him. If that sounds grandiose, well, yes. But don’t forget that it’s from within his chalky vantage point that the lonely poet sends back word about his challenges to the divine, or status quo, or nature of being. Remember Matthew Arnold, listening to the waves on the Cliffs of Dover, reporting from solitude on what he has learned is true and must be written down, even if it be with chalk from the cliffs beneath his feet:

Ah, love, let us be true
To one another! for the world, which seems
To lie before us like a land of dreams,
So various, so beautiful, so new,
Hath really neither joy, nor love, nor light,
Nor certitude, nor peace, nor help for pain;
And we are here as on a darkling plain
Swept with confused alarms of struggle and flight,
Where ignorant armies clash by night.

The seventy-year sleeper is lost in his future not because the world has changed drastically. It hasn’t — the text makes explicit that when Honi returns, the men are still reading Torah and keeping the laws. No, it’s the context in which Honi forged his identity that has changed. Everyone who loved him, everyone he loved, is gone. I say “gone” because he doesn’t get to take part in their dying. He wakes up and all his people — the tethers that bound him to life—–have vanished. Whether or not we see our context as involving one lover, as does the speaker of “Dover Beach,” or many loved ones, “we are here as on a darkling plain,” supported above the eternal crashing sea by chalk. Lest we perish without love, misplaced like Honi, “let us be true to one another” and chalk our circles, making meaning for ourselves and our community, ephemeral though the circles must be.