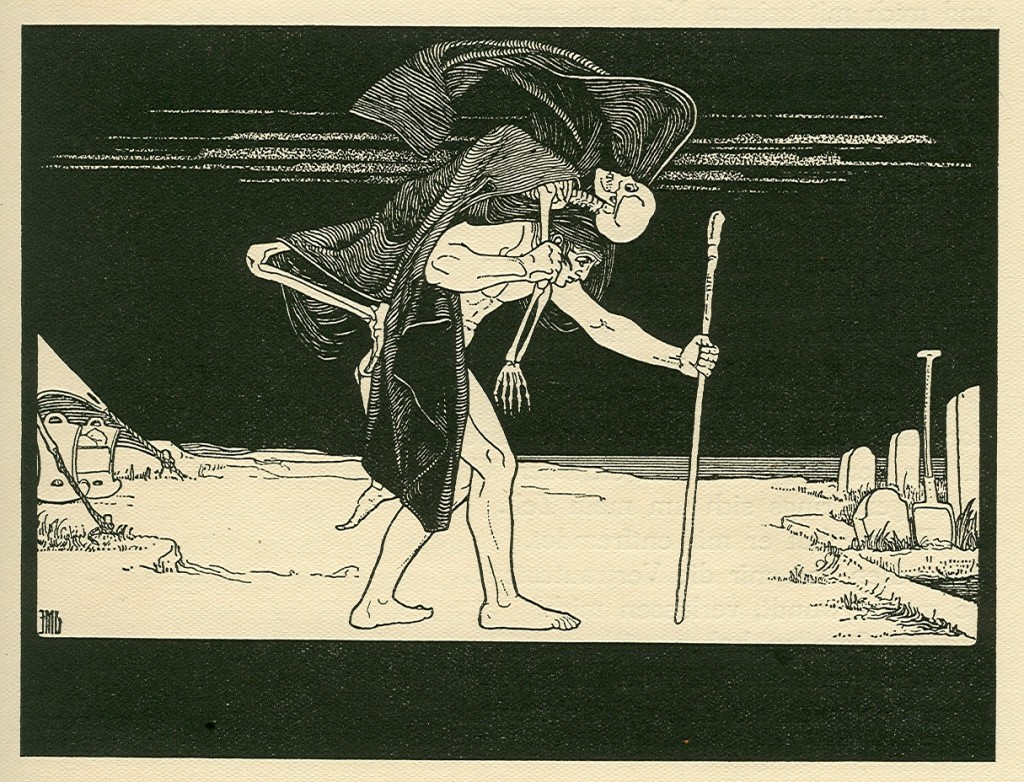 “A new day, or a new era, begins not with the start of new conditions, but with the demise of the old conditions.”

Jenny Levison and Josh Waletzky discuss “The Last Dybbuk,” a devised theater work incorporating dance and music. Through it, they are investigating how we know when an ideology is no longer relevant. Come see an excerpt of the project and hear Jenny and Josh discuss their experience making it on 4/1.

We are creating a work of devised theater that incorporates dance, music, text, light and shadow, adapted from “The Last Dybbuk”—a mesoyre (a supposedly true story) of the supernatural. We are devising with three artistic colleagues who also work in Yiddish theater, dance, and music—undz ruft men der letster dibik kolektiv—Avia Moore, Adrian Silver, and Eleonore Weill.

This is the story of a Hasidic wonder-Rabbi, the Lashkovitser Rebbe, famed for his ability to exorcise dybbuks (unsatisfied departed souls who inhabit the living) and a man who has broken with Hasidism and embraced the haskole (the Jewish Enlightenment) and who now believes that the whole dybbuk phenomenon is a sham. The man challenges the Rebbe to a showdown, telling him that if he can truly drive a dybbuk out of someone, he should be able to drive a dybbuk into someone. The Rebbe accepts the challenge, and sets the duel on Yom Kippur, the holiest day of the year. When the Rebbe fails to drive a dybbuk out of a possessed girl, the man humiliates him by bending over, ass first, taunting, “Yishokeyni” (“Kiss my…”). The Rebbe retreats to his home in defeat, where he stays until his death. And that, the story says, was the last time a dybbuk appeared in Galicia. The maskilim (partisans of the Jewish Enlightenment) had driven them out for good.

As collected, it’s a short tale with little to no character development or back story. Why doesn’t the original story tell us anything about the possessed girl? Who is she? Does she believe in dybbuks? Is she manifesting a fight against authority, or is she depressed, perhaps mentally ill? Why did the man break with Hasidism? What drives him to disprove the rebbe? What’s his relationship to Yom Kippur?

Also as collected, it’s a story centered around men. We have changed the challenger to be a woman—a midwife—and we now center the story around her and the possessed girl. The story takes place as one era was coming to an end, and another was starting, and this clash of time and ideology is central to our adaptation. We have spent much of our time together exploring how this moment in time should manifest in our telling as well as how to incorporate contemporary clashes of time and ideology into our work.

We’re interested in questions that we face in our daily lives, and that the characters also face: how much time do you give something before you realize it will never change? When do you know that something (a relationship, a difficult period, a depression, a political or spiritual era) is over?  What superstitious behavior do we adhere to, even if we, presumably maskilim ourselves, can’t justify it with science and rationality?

We are very early in the devising process, and we urge people to watch in the spirit of process rather than finished product. We plan to keep working on “The Last Dybbuk” until it’s a fully realized work for the stage—hopefully garnering grants, residencies, and productions along the way.

A new day, or a new era, begins not with the start of new conditions, but with the demise of the old conditions. Just as a Jewish festival begins at sundown. Just as the world when first created in Bereshis was dark and without form. In the excerpt of I. L. Peretz’s autobiography, he begins the account of his first encounter with the books of the Enlightenment with a description of a sunset (not a sunrise!) that he saw “as if for the first time.” Our story tells of the start of a new age in Jewish life not by describing the birth of new ideas but by telling of the demise of the old era, the time of wonder-Rabbis and dybbuks.

Which texts that you studied this year so far have most stuck in your mind? Why? How have they, or other texts, inspired this work?

The Creation story in Genesis 1 and the discussions about “primordial” time and light, as distinguished from “ordinary” time and light, have been fundamental to us. When a dybbuk enters into the body of a living person, we get a mixture of primordial time with ordinary time. The soul of the deceased “lives” in primordial (cosmic or spiritual) time while the possessed person lives in ordinary time. The drama of the Enlightenment driving out the dark forces of superstition also relates to the Creation text. Which light do we seek? The light of reason? Or the divine light (Ohr) of, “Let there be light?”

“The Library Key” (passage from the autobiography of I. L. Peretz) has been a central text. Peretz encountered the Enlightenment at just the same time (mid 1860s) and place (Jewish Eastern Europe under the strong influence of Hasidism) as our story. He struggled to read texts in partially understood foreign languages, which reminded him of overhearing snatches of shop talk while wandering around a marketplace on market day.

Our story is about a challenge to the reigning communal authority. In the “Mishnah Treatise: Rosh Hashanah, Chapter 2” we found a striking parallel to “The Last Dybbuk”. The reigning authority, Rabbon Gamaliel, is challenged by R. Joshua, who is more knowledgeable (in secular science) than is his superior. Rabbon Gamaliel fashions a duel between the two, to take place on the Day of Atonement, when the stakes will be at the highest. Similarly, the Lashkovitser Rebbe, challenged by a maskil (believer in secular knowledge), sets a duel for the Day of Atonement, to intimidate his challenger. In each case, the authority figure assumes he’ll win, banking on the fact that his challenger still believes in the reigning spiritual system, with all of its infinite rewards and terrifying punishments. But in each case, the authority figure has to fight to assert social hierarchy over rational inquiry.

In addition to the above texts, we’ve been engaging with a number of others, from “Song of Songs” to the “Yippie Manifesto” to “The Crucible” to Judith Herman’s seminal work, “Trauma and Recovery: The Aftermath of Violence—from Domestic Abuse to Political Terror.”