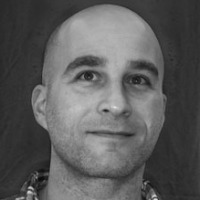 Ben Gantcher’s recently completed collection of poems, “Snow Farmer,” was a finalist in the 2014 Omnidawn Open book contest. His first chapbook, “Strings of Math and Custom,” was published in 2013 by Beard of Bees Press and is available online as a free PDF. “If a Lettuce,” his first manuscript of poems, was a finalist in the National Poetry Series and Bright Hill Press contests. His poems have appeared in many journals, including Tin House, Slate, Guernica, and The Brooklyn Rail. He was nominated for a Pushcart Prize, a resident at Ucross and Omi, a correspondent with the Hyde Park Review of Books and a poetry editor of the journal “failbetter.” He teaches math, Language Structures and an interdisciplinary writing and visual art course at Saint Ann’s School in Brooklyn, NY, where he lives with his wife and three children.

Often I bump into my poems, they show up without warning, without my having much say in when they arrive and what it is they’ve come to do. So I can’t be sure that our inquiries into the nature of time (the nature of Jewish time? the Jewish nature of time?) will appear explicitly in my poems. I can say, however, that melancholy, the emotional registration of time’s passage, is the mood that drives a lot of my work, and the poem is the cure for the melancholy that engenders it, the form that prevents the emotion from dissolving into useless feelings, resentment, despair, depression. Moreover, the flip side of melancholy, for me anyway, is a barely contained giddy pleasure in the particularity of the teeming world. Which is to say that even the joyous poems have earned their lightheartedness by grappling with and transforming the melancholy that underwrites them. Time is the medium of loss and the field against which the glorious particulars are emblazoned. It has always seemed to me that the melancholy at the root of so many poems is my natural inheritance, and that inheritance was sanctioned by the wise, weary, Yiddish-inflected outlook of my elder relatives, emigres from Europe. Another way of putting it is that the soulfulness of which Yehuda Amichai might be the embodiment is an historical variation of a crucial and versatile species-wide emotion, one which enables us to sit inside the beautiful in its passing, reckoning the transience of everything and endowing the world with a moral dimension, or as Keats has it, it is melancholy that lets a person develop the “strenuous tongue [that] can burst Joy’s grape against his palate fine.” I may write a series of POSTCARDS, short musical poems that will try to rise up against time’s totalitarian march by inducing reverie, the poet’s secret weapon, which imbibes melancholy by the jeraboam (and having stumbled on the Hebrew etymology of that word, I’m happy to report that its likely roots are apt, so l’chaim!).

One of my favorite poems having to do with time is Zbigniew Herbert’s “Elegy of Fortinbras” as translated by Milosz and Scott.