MY SON THE PRIEST 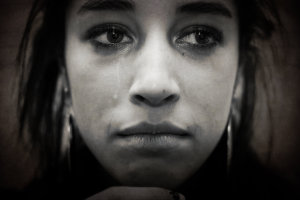 Sara Guver Hyman
We are gathered around the table at the LABA House of Study reading from the Book of Samuel: the heroine, Hannah can’t get pregnant, she pours her heart out to G-d* (see below).  G-d hears Hannah’s prayers, promises her a child and in return she promises that when he is weaned she will give him back to G-d via the Hebrew priesthood.  Cut to a year-and-a-half later: Hannah is taking the infant Shmuel (Hebrew for Samuel) up to Shiloh to hand him over. At this point in the story, many of the House of Study fellows (especially those with children) expressed concern. They painted a vivid picture of the unbearable grief Hannah must be feeling as she drops Shmuel off with the priests, her child being ripped away from her.
Me? I think Hannah’s feeling pretty good.  I’m pretty sure she’s happy. Happy like “a room without a roof.”**
Hannah was a woman of tremendous faith. That faith (coupled with childless desperation) brought her to the town of Shiloh where she wailed to G-d from the deepest part of her soul. It was a cry so potent, so powerful, it ripped a hole through the veil separating G-d and woman. Hannah had a direct relationship with G-d and an innate talent for communication with her/him. The pregnant Hannah already realized that the child inside her was bound for greatness. She was planning her son’s career path and taking the steps that would ensure his close proximity to G-d. Nothing but the best would do for her baby boy. In other words, “take my son, please !” (ba-dump-bump).
Now certainly, Hannah’s act of giving Shmuel over to the priesthood was rueful as well as joyful – what mother can bear to say goodbye to her child?  But I posit that she knew in her kishkes that she was giving him up to a great destiny.
Here’s the thing: Hannah was a stage mother. It’s true. Hannah knew that her baby boy was destined to play a spectacular role in the drama of the Jewish people. Not the leading role mind you, but an Oscar-worthy attention-getting character part that is absolutely essential to the plot and cannot be left on the editing room floor. Shmuel the priest will be the one who will recognize a pretty shepherd boy with dirty feet on the side of the road, smear his forehead with scented oil and anoint the future. Without Shmuel there is no David. Without David we would missing a LOT of great Jewish drama. Shmuel the priest is a fabulous role and Hannah wants it for her child. She is not merely “bringing him up” to Shiloh; she’s prepping him along the way: “Sing out Shmulik!”***
I love how Hannah gives away her child. I love how moving it is, how theatrical it is and how it’s really about my mother and me.
My mother, Sara wanted to be a dancer on the stage.  She lived in a time, a place and a community  (Russian Jews in Istanbul in the 1930s) where women who went on the stage were tantamount to being painted whores. So my mother became a nurse instead. Yet that passion for dancing remained inside of her and had to be expressed.
My mother’s philosophy was Dance = Life. She passed it on to her children: my older sister Barbara, my younger brother, Myron and me. She’d plop a 33 1/3 record album on the player and we’d dance like gypsies around our smallish West Los Angeles living room. I caught the dance fever from my mother surely as Shmuel caught the voice of G-d from Hannah.  Dance = Life = Joy = G-d. My mother, Sara Gutmacher Güver Hyman (every time she moved to another country they changed her last name) fed me dance like mother’s milk and dedicated me to the House of Dance.
When I was 16 1/2 and leaving home to go to dance conservatory in Belgium, she wept – just like Hannah wept giving Shmuel over to the priesthood. But my mother, just like Hannah, was crying tears of joy. In my life up until now, I have gone through many identity changes, name changes and career changes but when my mother was alive, she always, ALWAYS proudly introduced me as  “My son, the dancer.”
I raise a glass of sweet red wine to my mother, to Hannah and to all mothers everywhere who can recognize the higher destiny of their children and joyfully leave them at the gates of possibility.
* I write him/her as G-d because I’m a little bit orthodox and a little bit rock’n’roll,
** See “The Book of Pharrell”
*** See Sefer HaMerman or The Book of Ethel, Chapter 5, Verse 17 – “And it came to be that Gypsy played the St. James Theater….”
Categories
Mother
Tagged
Martyr