SEX, DEATH AND, WHAT ELSE, MOTHERHOOD 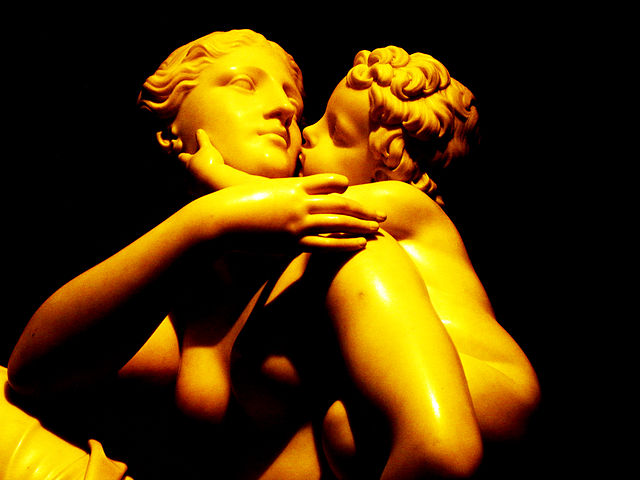 How ironic is it that Eve, mother of all living things, is also associated with death and mortality? In the book of Genesis, Eve is portrayed as the weak moral link, the one who allows herself to be tempted by the serpent, eat the forbidden fruit, and then in turn tempts Adam to do the same. The punishment for this sin, according to Genesis, is the grim reality of mortality: death, painful childbearing and the need to toil for one’s livelihood.

Why Eve? Why does the source of life, the mythological mother-figure that we all pine for, become also the bearer of death? Are we afraid the great womb of which we emerged will swallow us back like a giant black hole? Or is it the other way around: perhaps this myth taps into our fear of being abandoned by the great mother without which our chances of survival are close to nothing? Or perhaps there is another explanation, a bit more complex, that encompasses these two elementary fears and merges them together.

In my opinion sexuality, and in particular the fantasy and fear of the sexualized mother, play a key role in this complicated mythological riddle. On one hand, there is nothing more intimate and visceral than motherhood. Sexuality and motherhood are fully intertwined: the very organs and gestures that are used for sex are in turn reinterpreted as tools and manners of mothering. The intensity of sexuality pales in comparison to the deep and lasting sensual and symbiotic relationship of motherhood.

On the other hand, a sexualized mother imposes a threat. If our mother is a sexual being it means that we must share her with her partners and with our potential siblings. Sharing our mother does not only compromise our survival potential, it also signifies the expulsion from the Edenesque exclusivity of the prefect union of the womb and early childhood – an expulsion that is a formative trauma in the drama of individuation.

The sexual undertone, with its elements of fear and attraction, is written all over the biblical story. The serpent, a potent phallic symbol that speaks of sexuality and danger, utilizes the dynamic of sexual seduction in order to tempt Eve to bite into the forbidden fruit – which in its own is described in terms of beauty, attraction and desire. The first effect of eating the fruit of the tree of knowledge is the recognition of one’s nudity and the first sensation of shame – which is closely associated with the budding of sexuality and the erotic self. The equation of Genesis 3 is very familiar to the post-Freudian mind: A sexualized mother is pined for, and at the same time fearfully shunned.

This notion is not limited to our contemporary reading. Rashi, the famous French medieval commentator states openly, quoting the Talmud[1] and the Midrash[2], what seems to be the hidden sexual undercurrent of Eve’s temptation: “ […] since Scripture[3] wrote, And they were naked, it juxtaposed the section of the serpent, to let you know that because he saw her naked and saw them engaging in intercourse, he desired her and came upon them with a design and with guile.”

But this is not all. Some sources assume that Eve and the serpent actually consummated their unholy union. The Babylonian Talmud[4] speaks of the filth, or defilement, that that was injected into Eve by the serpent while they were at it – a defilement from which we were cleansed only many generations later, during the revelation on Mt. Sinai. Jewish mystics and Hassidic masters see this defilement seeping through our spiritual and carnal bodies to this very day and refer to it by the Kabbalistic term Zuhama denahash, or “the Serpent’s filth.”

The fear of the loathsome reptile copulating with one’s own mother is a deep and dark one. Its nature may be psychological, developmental or evolutionary – but it is a most potent fantasy regardless of its origin. The serpent symbolizes not just death, but also a dangerous force of life, a demonic Eros. This is how we punish our mothers for not abandoning sexuality after we – the perfect fruit of her womb, came to be.