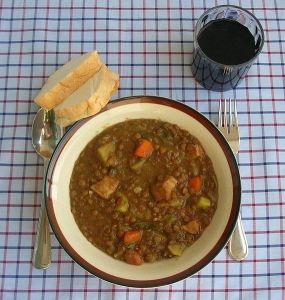 Jacob, son of Isaac, has been on the run for two months after taking, some say illegally, most say immorally, his brother Esau’s birthright. Yesterday we sat down with Jacob for an exclusive interview about how he pulled off this epic heist, and why he did it. Jacob requested that we do not disclose the location of this interview.

Jacob, first things first, how did you pull this off?

So what is the difference?

Oh, you know it. We all know. Take a simple pot of lentils. It is often the case that is all they are, a simple pot of lentils — a humble meal. But when I offered Esau my lentils he had just come in after a long day of hunting; His eyes, wind-weary, his hands, heavy and cold. The warmth of the food, scent-laden air, stillness inside of my tent and company of me, his brother, was, at that moment, worth his birthright. A good meal serves a hunger that is more than physical.

What about for the meal you made for Isaac? They say you presented him with your mother’s goat pretending you were Esau presenting him venison. Is that true?

Yes. I did just that, to receive my father’s blessing for his first born. Again, this was all about understanding the psychology of the meal. Yes, he needed meat, my father. He is old. He wanted, or needed, a good piece of meat, to press the flesh and blood between his now feeble jaw. But it did not matter what type of meat, because, at his age, he can’t distinguish the difference between venison and lamb, goat and cow. He has lost his sense of taste, you see.

He needed to believe that it was a product of a hunt.  He wanted virility. He wanted blood. It was an act, and he needed a prop.

Esau simply did not need to waste his time hunting venison. He could have, like I did, gone out and killed the first thing he saw.

(Jacob pauses for a minute.)

Esau might be able to procure better meat, but I understand that satisfaction from eating comes from far more than the food you consume. Food is like ideas: you can have the best of the best, but if you don’t prepare and deliver it at the right moment then it is all for naught.

Ambition. A lot of it was ambition. Reckless ambition. But not just for me. This wasn’t about personal greed. This was about what is best for my people, all of us. My mother believes ambition is a good thing, and that we need an ambitious leader. This is why she did what she did.

Esau was a man of the field. He understood nature. I, on the other hand, have spent my life quietly observing people.

So, yes, I hurt my brother. And yes, I deceived my father. But I did it for the good of many, for the future of our people.

What now with Esau?

I feel terrible. And scared. Perhaps one day he will forgive me.