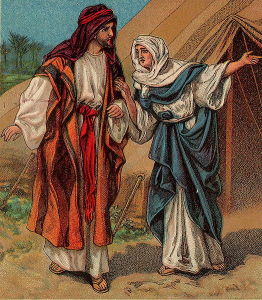 When I re-read the story of Jacob and Esau with LABA and realized that its denouement was Jacob’s exile from his family, from his own mother, I was shocked. I thought it might be fun to re-imagine her scheming with another layer of purpose, in which she sought to raise one child up but also keep the other close to her side.

Ugly men learn how to leverage their eyes to create the impression of beauty, vulnerability, depth.

So it is with my son Ethan—red-skinned, coarse and hairy since birth—whose coal-black eyes have over time, pierced too many women’s hearts to count.  When he sits down with you over a steak (he loves his meat, my Ethan) he blazes with warmth. He tries to make you laugh, and you laugh! He offers you a rough hand, and you’d think it was as soft and milky white as his twin brother, Jay’s.

That’s why I did it, why I played my little trick with the family business. Not because Jay was my favorite, not at all, but because it was foreordained in their natures. A mother knows.

Jay came out of the womb clutching at Ethan. Since that moment, he has been possessed of an girlish beauty and a unearthly competence.

Jay should have been born first; he tried to be born first—giving me so much anguish. And though he lost that battle, I knew right away: He will be the one who changes the world. The world will credit you.

I was in awe of Jay, and I fought for him. I marched to school and made sure he got into the classes he wanted, the enrichment programs, the debate teams and so on.

“My son is special,” I said of Jay. The teachers nodded, and then we inevitably joked about Ethan’s antics, Ethan who grinned and shrugged his way onto every team, and away from missed deadlines.

Because as much as there is to admire and kvell over in a quiet, competent and intelligent child (needless to say, Jay is an ethical vegetarian), there’s also much to adore in a child who is raucous and foolish, and needs his mother.

Mothers try not to have favorites, but how can we not have special inclination to protect the ones who yearn for us, the ones who suckled the most hungrily, the ones who come forward with their skinned knees, broken hearts, and scrapes, and give us purpose?

“Mom, I forgot my textbook and I have a paper due at midnight.”

“Mom, should I play forward or defense?”

Together, Ethan and I worked it all through. I soothed him. He confided in me: girls, friends, even his email password when he got lost on the way to his lacrosse tournaments his parties and barbecues.

As for Jay, the only problem he faced was his father Ira’s notion about masculinity. No matter how many awards Jay won and perfect scores he earned, Ira was gladdest when Jay picked up his baseball glove, horsed around (a rarity), or brought a pretty girl home for dinner.

Jay sensed this despite my efforts to shield him, and it lit the boiler of his ambition. Ethan sensed this too, and his place closest to his father’s heart nursed him into a sort of oblivious, innocent stupor. I saw all this, and marked the time.

When Jay and Ethan graduated from college (one from Princeton, the other a “party school”), Ira had to decide which of them would inherit their father’s business and be trained to run the Jerusalem branch of his company.

Only one, Ira had always felt, could receive this birthright. The other must make his own way. Perverse, but he felt justified: expand the family empire with one hand, consolidate in the other.

Ira still held within him the wound from the day he turned eighteen and his own father marched him to the draft office to enlist. Trauma should have made him compassionate but it never works that way; it just creates an ever-whirling loop of pain.

Ira had planned to give the job to Ethan, foolishly. The eldest, the chip off the block. Ira didn’t see how wrong his choice would be. His mind had shrunk. I thought, Ethan in Israel.No. He would get lost. He would get into a fight. He would get shot! He would lose the family fortune. He would get someone pregnant, and then I’d have a grandchild already conscripted into the army, and that was too much repetition for me.

So I put my plan into place. I worked on Ira. I said things like “Ethan isn’t much of a Hebrew speaker,” and “Jay is so reliable and self-sufficient.” I said “I have a premonition that Jay will uphold the family name.”

I confused him, mixed up their names. Ira’s weariness showed. We pushed against each other, but he didn’t push as hard as he might. “What are you planning, woman?” he asked, and I recalled the day we’d met at a bar on York Avenue; he was on leave from the army. How smitten he’d been. I’d managed him even then. I touched his arm and said “leave it to me.”

Over lunch at his favorite vegan restaurant, I asked Jay: “do you want this?”

And he said, “of course I do, ma, but,” and he grinned a sly grin, “Ethan already gave it to me this summer, you know. He was starving after soccer and I had just made myself homemade soup… so I traded it away for the family business.”

I sighed. Ethan could be so impulsive. All the more reason to keep him close. I shook my head, and took Jay’s hand. “Do you get manicures, honey?”

I said, “If we’re going to do this, you need something important.”

I took out the scrawled-upon napkin and slid it across the table like a detective in a movie: his brother’s email password. Jay would protest, and then give in. He’d find the link to the contract waiting for him, set up by the accountants for Ethan. He’d press the button before his brother did (his brother was on a hunting and paintball trip with his frat brothers); he would sign the dotted line. I would smooth it over. He would leave us, Ethan would stay.

If you ask me why I deceived my husband, I’d say: A mother knows. It was in their natures. It was the universe’s will. I was just helping things along.