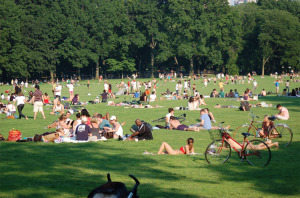 I like lists a lot. Not necessarily grocery lists, but rather lists from classical rabbinical texts. I feel that a series of pithy statements, often seemingly mundane, is able to challenge our sense of order, open up new possibilities, and make original connections.

The list we studied this month comes from tractate Sanhedrin (סנהדרין) in the Talmud. It is one of ten tractates of Seder Nezikin, a section of the Talmud that deals with damages, i.e. civil and criminal legal proceedings. At that time, the Roman Byzantine era, cities became more popular as fewer people were dependent on agriculture for their livelihood.

When we come to think of things that should be in a city in which we dwell, we think of different elements that we want in our lives. These fall into a mix of categories, everything from social to environmental, spiritual to economic.

This month’s text focuses on things scholars need in a city, but really it can apply to any of us with self-awareness. What these scholars are after is what we are after: a good city. The list is not hierarchical: the Talmudic scholars do not determine for us what is more or less important. But it does speak of having a city with established systems – systems of justice, hygiene, health and education.

But my favorite thing is the requirement for fruit, because it is beneficial to the eyesight. This comes after a list of practical elements, and to me it represents the need for beauty, which is essential to our lives.  For me the “fruits” of New York City are the parks and the museums – especially the Metropolitan, which is in walking distance through Central Park from my house.

Ruby, what do you like about New York? What is your fruit?

I love its height, narrowness and elongatedness. The city is like a warrior’s spear, pointed at the heavens. I love the grid system, its symmetry and tightness of form and structure. I view it as a perfectly metered poem.

But my sweetest fruit I find in the parks – the bodies sprawled on the great lawns and the lazy haze that gives the tree tops a distant, dreamlike quality. They remind me of the fruits in the Talmudic passage, that light up the eyes and feed the soul with their sweetness and vitality.