Or how I, once again, discovered that I am indeed quite Jewish
by Elissa Strauss 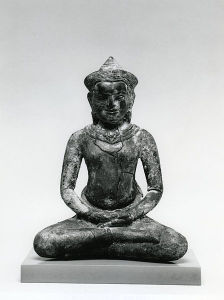 In my early 20s I left Australia, where I had been living for a few months, and went alone to Southeast Asia looking for adventure and enlightenment. I wasn’t ignorant of the cliches in my pre-marriage version of “Eat, Pray, Love,” but I was too young to be concerned with appearing hackneyed to myself or others.

A week into my trip I saw a poster for a six-night Buddhist meditation retreat, up in the highlands around the northern Thailand city of Chiang Mai. Buddhism appealed to me, though mostly from a safe distance (and by this I mean vis-a-vis Allen Ginsberg), so I figured it was a ideal time to learn more. Also, doesn’t a week of simple living always seem like it will do us some good?

When I got there I was handed a white starchy gown that I was to wear for the week. I learned that even though this was not technically a silent retreat, something I was careful to steer clear of, excess talking was still to be avoided. As you might predict, my idea of excess and the leader’s idea of excess differed greatly, but more on that later.

House rules were to rise at sunrise and then meditate for a few hours. After this we would take our one meal of the day, and then re-enter the meditation hut for another few hours of meditation. This would be followed by a drink break during which we served sticky sodas in flavors like lemon-lime and strawberry. We could then retreat to our narrow sleeping huts for a nap, or do a walking meditation in the humble garden.

We were instructed to avoid all distractions, a category widely cast, but I cheated on this prohibition with a paperback of Anna Karenina whose crimson adventures provided me with a much-needed antidote to the stillness of life on the mountain.

I had my fair share of Private Benjamin mishaps at the retreat, the worst being when I was interrupted during my shower because they could hear that I was doing it wrong.

When I walked into the bathroom, soap and shampoo in hand, to my right there was a pail half-full of water, in which a smaller yellow plastic bucket was bobbing up and down. To my left was a faucet about three feet from the ground. Ignorantly, I turned on the faucet and crouched down the ground where I attempted to get a nice lather on my then quite long hair.

“Rinse with the bucket,” came a voice from the other side of the door.

Before dinner we would have another treacly soda break, which was immensely satisfying considering we had not eaten since 10:30 am. I never got used to that.

Our leader, who seemed to be without any specific religious designation but lived as a nun for some time, would use this time to go over some Buddhist teachings. The other attendees sat quietly and nodded. Me, I asked questions. Lots of them. Our leader tolerated me – I think she had a feminist streak and enjoyed a fellow spunky lady – but seemed to want to reform my busy mind.

I left the retreat with an understanding of why people meditate and practice Buddhism, and an even deeper understanding that it wasn’t for me. Had someone given me the Talmud’s list of the ten things scholars require in a city, I might have known this going in.

In many religions, the most holy and learned men and women have traditionally sought refuge on mountaintops and deserted plains in order to devote themselves fully to enlightenment.

What did their Jewish counterparts seek? A well-developed city with a decent bath house, some kosher meat, a good school, a surgeon, and a notary. Oh, and some nice fruit wouldn’t hurt.

It would be easy to dismiss our sages for being overly concerned with their material well-being, or, worse, for being cowards. A real mystic should be able to live without the conveniences that a large Roman city provided, right?

But I see it another way. This was a culture devoted to discussion and debate. And also being part of society. They married, they ate, helped the poor, and shvitzed together at the public baths.

These sages didn’t see enlightenment as avoiding physical urges or separating themselves from society. Instead, they saw the path to truth and understanding running through their exchanges with other people. Pre-Internet crowd-sourcing, if you will. They didn’t run from the chaos of the city, but worked hard to figure out a way live amidst it and even to organize it.

I now realize that I, too, benefit more from a room stuffed with insights on the noisy corner of 14th Street and First Avenue (the location of the Y, where we hold our House of Study), than I do from a  candlelit hut in the wind-swept Thai countryside.

Oh, and some nice fruit doesn’t hurt either.