HOW WE GOT BACK TO THE WILD

Cain, Percy Bysshe Shelley, and a trip up the Alps
by Elissa Strauss 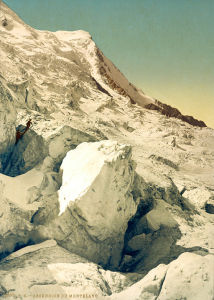 For centuries the Swiss Alps were nothing more than an inconvenience for travelers. They were something to skirt, a sign that it was time to veer left or right because carrying on forward simply wasn’t worth the effort.

It wasn’t just the Alps. Until the late 18th century, in the western mind, wild places were geographical pariahs, met with either indifference or hostility by the world around them. The wild was seen as a manifestation of chaos in a world striving for reason and order. It was a godless place, lacking in harmony and empty of comfort.

And then along came the Romantics. For them, the rugged and remote mountain range had great appeal, and its inaccessibility only turned them on more. They saw the wild, the irregular and untamed, as places to find oneself, away from the polluting forces of human society. And off to the wild they went, to experience the sublime.

While scholars struggle to precisely define Romanticism, it is generally seen as a movement straddling the 18th and 19th centuries that rejected the rationality of the Enlightenment and embraced feeling over reason.

Philosopher G.W.F. Hegel described romanticism as “absolute inwardness.” Victorian historian Lytton Stratchey said that Romantic writer Jean-Jacques Rousseau belonged “to the new world of self-consciousness, and doubt, and hesitation, of mysterious melancholy and quiet intimate delights, of long reflections amid the solitudes of nature, of infinite introspections amid the solitudes of the heart.”

Simply put, the Romantics were men and women who could no longer resist the call of the wild, and they yielded to it. They reveresed a resistance to the wild that went way, way back, all the way to Cain and others in Genesis.

Cain was well-aware of the heightened emotion, even madness, that the wild can elicit, and found himself succumbing to it on that fateful day on the field with Abel. He quickly realized that the wild was a dangerous, godless zone, and panics when God tells him that the wild is where he will stay, forever as “a fugitive and a wanderer … in the earth.”

Cain, who doesn’t like the idea of spending eternity out in the wild, responds:

“Behold, Thou hast driven me out this day from the face of the land; and from Thy face shall I be hid; and I shall be a fugitive and a wanderer in the earth; and it will come to pass, that whosoever findeth me will slay me.”

In “Mont Blanc,” written in 1917, Romantic poet Percy Bysshe Shelley describes his experience as a fugitive and wanderer on the mountain. In the poem it is almost as if he is picking up where Cain left off.

Unlike some of his contemporaries who focused exclusively on the goodness of nature, Shelley, like Cain, doesn’’t shy away from the fact that the wild was something to fear.

In the third stanza he describes the mountain as:

A desert peopled by the storms alone,
Save when the eagle brings some hunter’s bone,
And the wolf tracks her there – how hideously
Its shapes are heaped around! rude, bare, and high,
Ghastly, and scarred, and riven. -Is this the scene
Where the old Earthquake-demon taught her young
Ruin? Were these their toys? or did a sea
Of fire envelop once this silent snow?
None can reply – all seems eternal now.

But unlike Cain, Shelley is able to move past the fear and uncertainity he experiences in the wild. He draws attention to the eternal cycles of death and destruction on the mountain, but he also points out the creation and redemption. Also, Shelley points out that the similarities between the power of nature and the power of human imagination are something to embrace rather than resist. Ultimately, the wild is a place where humans can make meaning and find truths, truths that are their own.

Mont Blanc yet gleams on high:-the power is there,
The still and solemn power of many sights,
And many sounds, and much of life and death…
The secret Strength of things
Which governs thought, and to the infinite dome
Of Heaven is as a law, inhabits thee!
And what were thou, and earth, and stars, and sea,
If to the human mind’s imaginings
Silence and solitude were vacancy?

We cannot know, but perhaps after years spent east of Eden, Cain started to understand the same thing. Maybe he let go of the desire to till the land and fell in love with the “still and solemn power” and the “secret strenght” of the wilderness around him.

For more reading on the Romantic movement, I recommend “The Romantic Revolution: A History,” by Tim Blanning.