GATEWAY TO THE WILD

Freedom and its discontents
by Basmat Hazan and Ruby Namdar 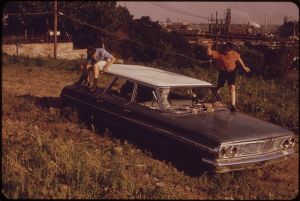 Ruby:  The tale of Cain and Abel, describing the first murder in human history, happens in an open field. Do you think the field location carries a special meaning?

Basmat:  Yes – the field is not just the setting, but a rather crucial element to the story. Cain was a farmer, who grows things in cultivated fields, while Abel was a shepherd who led his flock through wild fields. Cain has a deep connection to the land. One day they both offer sacrifices to God. Abel sacrifices from the best of his sheep, and Cain offers from the fruits of the land. The meat-loving God prefers Abel’s sacrifice over Cain’s and lets them know. Then Cain takes Abel to a field where he kills him. The field is Cain’s portal to the wild.

Ruby:  Right, and then Cain’s punishment is to become a vagabond, who dwells in the chaotic, out-of-control part of existence. This matches the crime – and the persona of the perpetrator as well: the man of the field. It is important to note that Cain was not considered a villain in Jewish tradition, but a tragic hero. The reason for this is that Cain struggles with his sin, and is burdened by it. The Kabbalah traces his soul in many of the important figures of the bible.

Basmat:  Tragic, indeed. Abel’s blood is screaming from the land and God hears it, but when God questions Cain about his brother, he tries to avoid the topic. As a result, there is a disconnection between Cain and the land, and the land (or adamah, a feminine noun in Hebrew) will not share her strength with Cain any more. He is destined to become a wanderer. The story of man and land, whether controlled or wild, plays out alongside the story of man and man.

Ruby: The field in the tale reminds me of the fields of my childhood: they were empty housing lots, small rectangular patches of wilderness, soon to be built upon, that stretched between the buildings and houses of our Jerusalem neighborhood.

Basmat: Yes, like mankind’s first pair of brothers, those fields allowed you to stand outside the boundaries of the civilized, controlled area, in a wild space where anything can happen. Those are places where you can find deep connections, to God and to oneself. But it’s also a place where you are open to crime and danger.

Ruby:  Absolutely. In the suffocating cosmos of my over-protected middle-class Jewish childhood, the allure of those islands of chaos was immense. They were mysterious and dangerous. One could vanish in them. The grown-ups’ world would disappear, and the fantasies that fill the young mind would form an alternate reality. Our games were innocent, but also often cruel. They were laced with an unnamed fear that now, in my adult years, exists only in dreams.

Basmat:  You know, the field is featured in almost every one of the big stories in Genesis, where it has a similar effect to the one you experienced as a child. Everything changes in the fields. You see it with Abraham, who buys a burial site for his wife Sarah in a field, with his son Isaac, who prays and meditates in the field, and Isaac’s son Esau, who is “the man of the field” and his smell is that of “the field that was blessed by God.” There is also Esau’s nephew Joseph, who had dreams of his brothers in the field and was caught by them in the field. And, of course, in Cain and Abel.

Ruby: You’re right. The greatest epiphanies of the Bible take place in the field. The greatest crimes, too. It all happens there.