WAS THE ARK HEAVEN OR HELL?

A Brief Debate
by Basmat Hazan and Ruby Namdar 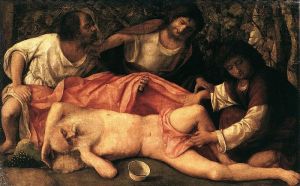 Did Noah turn to drink after leaving the ark because he was sad to have left the heaven? Or traumautized from living in hell? “Drunkenness of Noah” by Giovanni BelliniBasmat: Ten generations after humans were created, not long after the sons of God came down and fell in love with the daughters of men, the earth was filled with such evil that God decided to start all over. He decided to erase the world with a flood, and saw that “the fountains of the great deep were broken up.” All would not be destroyed, however. A small “time capsule” would preserve the essence of life and travel through the 40 days and 40 nights of wet chaos. This is the ark, built by Noah and filled with his family and “two of every sort [of animal] … male and female … everything on the dry land in whose nostrils was the breath of life.”

I’ve always seen the ark as a small utopian space; a mini-Eden, if you will. In the ark humans and animals are equal, and together they live in harmony. From this a better world can begin. From this womb will life emerge in its best form.

Ruby: Utopia?!  I beg to differ. Hell is the first term that comes to mind. Life in Noah’s ark was nothing short of vile. Imagine the stench, the crowdedness, the un-naturalness of the situation, not to mention the absolute terror, the uncertainty, the betrayal of the creator who could not deal with his own creation – and all this topped with a nice layer of survivor’s guilt. Utopia indeed!

Basmat: It’s because you are thinking of it literally, my dear. The ark is not a realistic space. You are stuck on noise, smell, garbage. But the ark is a mythological reality. It is something we should aspire to.

It’s like what Isaiah describes in his eschatological prophecy: “The wolf shall dwell with the lamb and the leopard shell lie down with a kid goat.” Or like what our rabbis said in the Midrash Genesis Rabbah 20.5: “In the future all will heal.” The ark is a little glimpse into that end-of-days ideal existence – the  one a new and better world can come out of. This is how we should view the ark in our collective memory. As a possibility.

Ruby: No, no, I refuse to fall into this transparent poetic trap! Good myth MUST have a strong realistic undercurrent, or it does not penetrate. Myth that is completely divorced from reality becomes kitsch. The realistic element is the dark matter that lurks under the skin. Without it myth becomes an inferior substance, like decaf coffee and those “Chateau Nowhere” non-alcoholic wines that you see in supermarkets.

Just look at what the Babylonian Talmud, in Sanhedrin Folio 108a, has to say about it:

Rabbi Hana bar Bizna said: Eliezer [Abraham’s servant] remarked to Shem, [Noah’s] eldest son, ‘It is written, After their kinds they went forth from the ark. Now, how were you situated?’

He replied: ‘[In truth], we had much trouble in the ark. The animals which are usually fed by day we fed by day; and those normally fed by night we fed by night. But my father did not know what was the food of the chameleon. One day he was sitting and cutting up a pomegranate, when a worm dropped out of it, which it [the chameleon] consumed. From then onward he mashed up bran for it, and when it became wormy, it devoured it.”

This is mythmaking at its best: Two mythological characters, Eliezer and Shem, are having a casual conversation about the reality of life in the ark, focusing on the most mundane details: what and when to feed the animals. This realistic touch does NOT take away from the power of the myth. On the contrary, it makes it more powerful – certainly more powerful than a sugar-glazed image of men and beasts sitting together and singing the Lord’s praises in perfect harmony. What is up with you, my dear? You sound like someone who got trapped in the 60’s.

Basmat: Have you ever heard of Hercules going to the bathroom? That’s what you are looking at when you say that about the ark. Myths are above the trashcans of reality. Clearly you can envision the ark as hell easily, if you look at it as a zoo full of flies and worms. Noah’s ark is a chance for a different beginning. It is a second chance.

The hebrew word for ark is teiva. It is used only one other time in the bible: to refer to the basket Moses is placed into by his mother. We have the big Noah’s ark and the small Moses’s ark. Those two ship- or womb-like structures carry in them the potential redemption.

Noah’s ark inspired thousands of children’s books and drawings, games and cartoons. Not because it is kitsch or silly but because it contains the beauty of a world that can be different, equal, full of hope. If we go with your view of the story, none of the animals would have survived for even 10 days!

But the whole point of the ark is the tikkun (repair) of the hell that was the world before the flood. The great kabbalist and poet of the 18th century, Rabbi Moshe Chaim Luzzatto, said the ark was a position of gathering inward in order to repair the strength of the world before it could start over. By focusing on providing and caring, the whole world is elevated.

Ruby: To each her own, my darling. If the fantasy of harmony stirs and inspires you – so be it. I personally find the image in Midrash Tanhuma, describing the exhausted Noah as he leaves the Ark at the end of his heroic misadventure – coughing, spitting blood and limping because the lion, who was not fed on time, bit his leg – much more real, touching and inspiring than any smug superhero who never takes a dump.

It is not the poop that I am interested in. It is the pain, fear, fatigue and frustration that are the essence of the human condition. For me the message of the Ark story is the opposite of utopia. It is about God’s reconciliation with creation and all its ills and limits: mortality, bodilyness, evil inclinations …

The bible says it in so many words as it draws the conclusion from this epic tale:

Genesis 8:21  (…) and the LORD said in his heart, I will not again curse the ground any more for man’s sake; for the imaginations of man’s heart are evil from his youth; neither will I again smite any more everything living, as I have done. 22 While the earth remains, seedtime and harvest, and cold and heat, and summer and winter, and day and night, shall not cease.