EVERYONE IN THE ARK 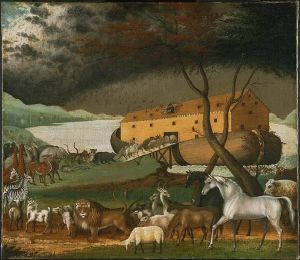 Once upon a time…a flood covered the entire Earth. A number of humans and animals floated in a ship until the water receded. Then they left the ship and re-started Creation.

Noah’s Ark is the ultimate mythological space: One that carries special imaginative power, so strong that we suspend the prosaic question of whether it really existed, of whether the story really happened.

I spoke with folks around the Y, some of whom had reactions to the “realities” of the Ark itself. Others volunteered their personal mythological places.

See how they answered one of these two questions about Noah:

Your Place: Noah’s Ark is a mythological space that’s proved resonant across the ages, inspiring every kind of artwork and story. Is there a mythological place that you sometimes visit in your imagination? Tell us about it and why it speaks to you.

That Space: Noah’s Ark held Noah’s family and all the animals for many months (well past the rainfall for 40 days and 40 nights) as the Earth was flooded. Imagine…What would it be like, to actually be in Noah’s Ark?

from the Lower East Side

At the Y: I’m in the Afterschool Program Enrichment Class

“It’s not imaginary, but I do like the Empire State Building. That’s why I built it. It’s the tallest building in New York City. It’s easy to build with Legos.

I went to the top. I felt like I was falling from the top of the world.”

At the Y: I work as a fitness monitor

“I’m curious how it’s organized: The actual architecture, the compartments, where are the animals going to stay. The humans, where are they going to stay? The actual dimensions of the ship, how many animals are actually included. There are so many different types of species: thousands, hundreds, millions. How do humans and animals live together, how are they separated, the logistics of it.

When people mention about Noah’s ark, I tend to see it as a cartoon. If it’s real, how would it pan out?”

At the Y: I swim, work out in the gym, take classes in Yiddish conversation and Great American Plays

“When you say mythology, I’m thinking of something else … in New Hampshire, when I got to swim better. And I would swim across a lake, to something we called Blueberry Island. For many summers, with my husband. When we got to the island, I’d pick up all the blueberries, and walk in deeply, and rise out, under the pines.

Even though it was real, it was my mythology.

And I’d get real warm, hot, lying in the pines. It was very sensual.

I’d use that at the dentist when I used to have pain. It worked for a long time.”

At the Y: We’re in the Afterschool Program Enrichment Class

Manuela: ‘Cause there would have to be jaguars.

Seamus: There might not be a lot of place for bathrooms.

Would it be exciting?

Manuela: Yes, that you actually get to live instead of die. To save the people you love. And God actually communicates to you.

At the Y: I take Punk Rope class, work out in the gym

“We had a country house in Massachusetts, so there was a little lake there. Me and two of my cousins … one of my cousins would be our ‘keeper,’ or our human. The cousin that was our human would gather food for the other two. And we would, like, go hunting.

We would play that game all the time. From age 8 to 12, maybe? The three of us. And we would kind of rotate the person who would prepare the food while the other two would go hunting. We would gather sticks and plants around the water. And we would pretend to cook the food.

There was a man-made lake that was fed by a stream. It was a very shallow stream with a lot of rocks, and plants growing around, so we could kind of hop around on the rocks and do that.

It was just like, ‘let’s pretend to be animals.’ It was always in the same place. So I guess it was a mythological kind of place.”