LET US MAKE A NAME 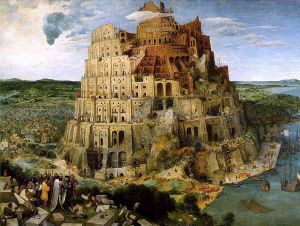 Tower of Babel by Pieter Bruegel the Elder

The story of the tower of Babel – an opaque, mysterious and highly idiosyncratic tale – is, somewhat surprisingly, one of the most resonant and formative tales of our civilization. What makes this strange and subversive ancient tale so powerful? In my opinion it is the fact that it condenses into its nine elegant verses the entire drama, bravado and heroic futility not just of architecture, but of art, science, philosophy and all other forms of human endeavor.

Verse 4 is the key to this fable: And they said, Go to, let us build us a city and a tower, whose top may reach unto heaven; and let us make us a name, lest we be scattered abroad upon the face of the whole earth. The aspirations of these earlier humans are multi-dimensional: They want to create a safe dwelling place for themselves, they want to soar upwards and gain a godlike gaze on creation and, perhaps most importantly, they want to create a center to the world, a reference point whose existence will lend meaning to the rest of its otherwise chaotic placelessness.

By building the tower, they wish to create what Mircea Eliade, the renowned scholar of culture and religion called axis mundi, the world’s axis, which by connecting heaven and earth renders meaning to a place and to the world that reorganizes itself around it. A contemporary reading of this tale will reveal its relevance to our time and mind-frame: It tells of the instinct to defy time, gravity and fate, an instinct which modernity has sanctified and placed at the center of the definition of all human endeavors. The inevitable destruction of the tower is only half tragic; the heroic element of the tale is as resonant and powerful as its “unhappy end.”

The Generation of Dispersion, as the builders of the tower were named in Rabbinic tradition, and who were vilified in traditional Jewish literature, can play a very different role in contemporary Jewish culture: That of unsung cultural heroes who managed, in spite of everything, to “make a name” for themselves and leave their mark on human mythology.